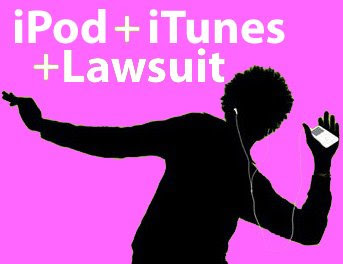 It's almost as if the timing of these lawsuits is made directly to counter good news coming out of Apple. Today's lawsuit comes as Apple just announced 4 million Disney movies sold/downloaded:

ZapMedia, with a patent granted Tuesday [March 11 2008] is claiming that [their new patent certificate] covers technology used in both the iPod & iTunes. The patent describes a central media server and a "plurality of media player devices" that access the server over various networks -- but it was filed for on September 20th, 2005, which, you'll note, is after the 2003 launch of the iTunes Store. ... ZapMedia also says it has an almost identical 2006 patent filed for in 2000 -- but that patent, as far as a quick USPTO search shows, hasn't been assigned to ZapMedia, instead remaining with Kenneth Liscomb and several other individuals also listed on the new patent.

Apparently, ZapMedia has been trying to shop this patent around to several Intellectual Property firms and IP attorneys and have been unsuccessful so they've decided to take matters into their own greasy grimy hands.

I'm getting tired of all these 'get rich' schemers who are using the patent system to sue legitimate companies for a quick buck!

The people behind this suit never intended to make any money by developing any technology, they planned all along to make money by waiting for another company, in this case, Apple, to do all the work and hit them with a lawsuit by claiming some type of violation because of preceived similarities!

I hope Apple legal sets them straight; they have been doing rather well in this regard, so I'm hoping they do the same here..

Frankly ... Me too! I see little press of other companies getting so many crazy lawsuits like this - where's the suit against amazon, microsoft, real?