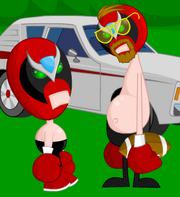 The single most popular thing people use Flash for is to watch YouTube videos, which you can already watch a subset of using the native Mobile OS X YouTube app. In short, is the lack of Flash keeping people from buying iPhones and iPod Touches?

I say it's holding back some.

For one, my eBay auction advertisements (called "eBay To Go") don't show up without flash.

I would rather embedded h.264 would replace Flash Video anyway, but I do want Flash on my iPod touch (Proudly still without the App Pack), because I watch video on Flash Players at sites other than YouTube. On the other hand, some sites overdo it with Flash which could crash Safari Mobile. perhaps Apple could allow us to turn it on and off very easily.

I agree ... Flash now supports h.264 but many sites aren't offering it yet, I also wonder if Flash has more interactive capability than h.264.

I forgot about JoeCartoon! Going now ...