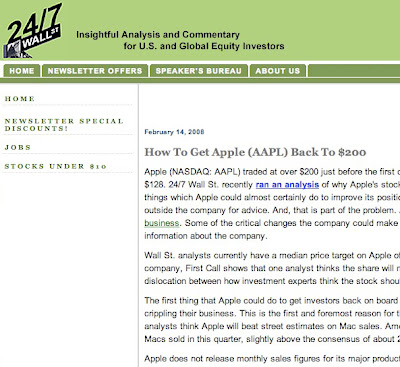 Douglas McIntyre (from Wall St 24/7) advice on how Apple could raise its stock price back to $200:

The next thing the company needs to do is set the date for a release of the 3G version of the iPhone. Citigroup’s research analyst covering Apple says to look for that announcement in the next two quarters. But, Apple almost certainly already knows the timetable. If the iPhone has an Achilles heel it is that it runs on a slow data network which handicaps users. A 3G version which would run on AT&T’s high-speed network would almost certainly lift iPhone sales and get people who currently own the handset to upgrade.

Apple will not release a 3G iPhone until at least 75% of the LAND AREA in the United States is covered and that won't happen (completely) until March 25th 2008 with more towers (and upgraded towers) going up until June 2008. My towers were suppose to be up by September of 2007 - proving that there is always the chance of delays. What if Apple announced a 3G iPhone and people delayed their purchase only to not be able to use it in most areas of the country. Why would Apple do that when the EDGE chips are less expensive and currently less power hungry?

My cellphone market is currently the largest per capita in the United States - WE DO NO HAVE GSM / AT&T 3G service here. Basically - only large cities have 3G. The first thing to come out of a 3G iPhone user's mouth when not in a 3G covered area, will be: "I though the internet was suppose to be fast under that 3G internet - maybe my iPhone is broken, I better call Apple!" Apple considers that people experiencing EDGE data rates while having a 3G iPhone will cause a customer service nightmare - I agree!