One more thing about the movie Cloverfield ... then I won't mention it until the DVD comes out One other compelling reason I was interested in Cloverfield is because it bucked the Hollywood trend of a blockbuster costing an outrageous amount of money to make. Cloverfield cost $25 Million (which allowed it to make a profit in it's opening weekend grossing $50 million worldwide) ... the advertising for the movie was essentially free as dozens upon dozens of websites picked up on the little things in the first movie trailer discussing them again and again in detail. I wanted to participate and contribute to this experiment in movie making.

Now, I want to touch on one other aspect of this movie that intrigues me ...

Back when the trailer for Cloverfield (then called "1-18-08") first came out I suggested that this movie might be a LOST television series tie in. I think it still may be. 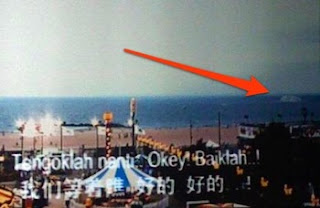 Yesterday I read this; Cloverfield graphic novel coming out.

"Remember this last shot in the film of our intrepid heroes at Coney Island, enjoying [a day] of amusement? Apparently something huge splashes down into the ocean in the background. We missed it, but if you couple it with the translation from the graphic novel that says the Japanese Tagruato corporation's satellite fell from orbit, then bingo. You've got the alarm clock that woke up the monster from its deep-sea slumber."

I almost want to bet that we will actually find that the Tagruato satellite was brought down by something related to LOST - possibly the satellite that was looking for the survivors AND that the monster could possibly be Ben's id (or the manifestation of the smoke monster/Jacob) - just like in Forbidden Planet. I will also bet that Tagruato is another subsidary of the Hanso corporation (the secretive entity that originally ran the island portrayed in LOST).

Wouldn't this be a great way to promote the DVD release of Cloverfield? (which coincidentally will probably come out in May 2008 when the movie takes place.)