A New Year With The Same Old Problems; It Gets Scarier @ Wegener Media

About 3 years ago I posted a story called:

This story has seen a lot of activity recently and I wanted to add an extra two cents of information about it. Back in the late fall of 2006, an attorney named George Gatgounis contacted me and said he was in my home town and would like to speak to me. After a brief phone conversation with little detail provided by Mr. Gatgounis - I discovered that he was an attorney and close personal friend of David Wegener - owner of Wegener Media in South Carolina. He wanted "to discuss a few things". I had an idea that the "Bidzirk Attorney" may have contacted David Wegener and told him about the litigation pending against me and might want to pursue something against me as well.
* I have discovered this to be true as I move forward with litigation against Bidzirk.

I discovered that David Wegener had filed a false police report against me and was threatening to sue me. (All of this revealed during the meeting with Mr. Gatgounis) During this meeting, Mr. Gatgounis offered me a bribe to remove the original story in its entirety. He offered me a full refund of my purchase price plus interest and offered to pay for my meal at a Chinese Buffet restaurant. This was in some ways a good faith gesture on part of David Wegener's attorney.

Mr. Gatgounis called David Wegener and told him that I offered to move a satirical statement from my blog article if and only if the police report was removed immediately. David Wegener yelled and screamed on the attorney's cellphone and acted very childish. I didn't need to actually hear what he was saying - although I did hear enough bits and pieces that indicated to me he was just as much of a jerk as I had remembered.

Mr. Gatgounis also revealed to me that a secretary named Kandi had been a problem within Wegener's organization and she had been let go. He made the indication that she MAY have been part of the problem surrounding my processor upgrade return. It's obvious that this isn't the case as I get a new report on WEGENER MEDIA almost every month - only half of them are publishable.

After this meeting, I immediately called the police department where I found out that Mr. Wegener had filed a "death threat" report with his local police department - nearly 1.5 years AFTER I had written the original article about his business. BUT, it was false regardless of when it was filed and the investigating police officer recommended that I file charges 'gainst Mr. Wegener for filing a false report - but I decided to let it go.

* I've heard nothing from David Wegener since

Quick background: I had purchased a PowerBook G3 Pismo G4 550Mhz Upgrade from Wegener Media in the fall of 2004. It failed a month after installation and David Wegener made the return process a living hell for me. He failed to refund all I was owed, lied to me about when he would return my money, delayed the return by 45 days to PURPOSELY avoid my still being under warranty, and cost me a great customer as it was next to impossible to explain the complication to them. 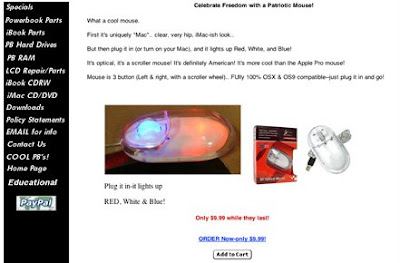 Two years prior, Mr. Wegener had (secretly) purchased one of my PowerBook G3 DVD burner upgrades and then I found out later that he started selling the same modification on his website. He also purchased a mouse that I sold on my website, discovered the source, and started selling it as well.

Thanks to all of you that added your stories to my original article on Wegener Media!

* I haven't been able to report on this until now due to my litigation status with Bidzirk, but now that's over - so enjoy!

I considered buying an older system from these guys, but from what others are saying I have decided to avoid them. I will stick with companies that value their customers more than they do a quick buck.

They have irresistible prices and seem to have decent products and service - it's just when and if you have a problem that you get into the horrific nightmare of customer satisfaction.

It seems that they have hired a search engine optimizing company (SEO) to bury your article. Just do a google search for Wegener Media. Also see this Apple discussion thread: