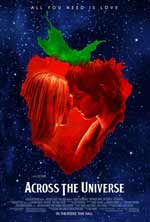 I haven't discussed movies a lot over the past two months. I've been mostly too busy to see many movies ... and honestly there hasn't been a whole lot out there worth while seeing.

I did manage to get in Across The Universe. This is a musical based coming of age tale based in the mid to late 1960's using the music of The Beatles to tell the story. The visuals are amazing - I could easily see this becoming a touring musical some day. Obviously the music is good - it's The Beatles.

By far the best performance is given by Eddie Izzard who plays a circus host ... his voice and face is made for the role.

While I'm not a big fan of war protestors - this movie handles a visual of the Vietnam War in a very compelling way - naked soldiers sporting only USA Army helmets and diapers carrying the HUGE Statue Of Liberty Through the jungle in Vietnam.

If this film is still playing in your area (it was slow moving through the circuit) - I would suggest you try to catch it.