Written Up, But Not Kept Down Pt III

Another time I was written up was for cursing in Gym Class.

I'm not a big fan of soccer. To say that I didn't give my very best when we played in Gym Class would be an understatement.

One day, my team, which consisted mostly of jocks, was 1 point behind the other team; consisting mostly of rednecks. A player from the opposing team kicked past me just a few feet in front their goal. I swiped the soccer ball from his feet. I immediately passed it perfectly to a player on my team. I ran as fast as I could towards our goal, hoping for the soccer ball to be passed back. The goalie for the opposing team was out of the goal; behind me on the field. The ball was passed back to me in a perfect kick from a team mate. I fielded it like Pele - letting the ball hit and absorb onto my chest and roll down my body to the ground. I dribbled the ball with one foot about 20 feet further. The opposing team was rushing down the field, shouting,

I stopped within 10 feet of the goal. In my head the announcer was already shouting,

... straight over the top of the goal; missing.

I shouted at the top of my voice,

The Gym Class teacher rushed the field and grabbed me by my arm dragging me off the field saying,

"Mr. Smith, you will not curse on my watch. How dare you! I'm forced to write you up."

It was rather embarrassing to be pulled off the field like that. But, I have to admit; all I could see is my team mate's disappointment from my missed goal.

We went into the the Gym teacher's office. He wrote on a disciplinary slip, 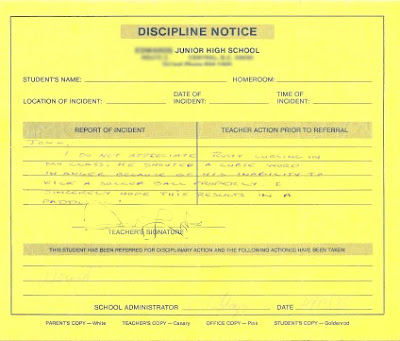 Don*, I do not appreciate Rusty cursing in my class. He shouted a curse word in anger because of his inability to kick a soccer ball properly. I sincerely hope that this results in a paddling.

On the top copy he wrote, "WORD WAS DAMN"

I was nervous. I walked from the gym to the main building, through the cafeteria, and up the steps to the office.

I got up to the front desk and showed the secretary the disciplinary notice in my hand.

She went down a small hallway and then poked her head back from around the corner,

"Mr. Jodd* isn't here at the moment, he had to go get something from home, so let me se if Mr. Valcons* is here."

Fear rushed into my heart, and it started to beat as though a mouse's heart while being held at the tail by a 5 year old boy. Mr. Valcons* was the assistant principal. Although I didn't know how the principal, which was my father's best friend; would have reacted to my disciplinary notice either.

An eternity of 30 seconds passed and I heard from an office,

"I see you got a foul mouth. Well, that can only mean a paddling."

A thought came to my head!!

"Can I go to my locker, I need to get something!"

"No, I just need to get something, please.

Mr. Valcons: "I suppose I can grant a last wish to a dead man, I need to find a witness anyway, go ahead you've got 1 minute."

I rushed down the steps and into the locker room that was just underneath the office. I went to my locker, dialed my combination, and pulled out my English book. I hurried back up the steps leaving the locker door swinging open.

The witness was none other than my Publications teacher. The incident with, "eating doing class" had just happened 4 weeks prior.

I was thinking to myself, "My plan better work!"

Mr. Valcons, "Well, this is Ms. Ackamear*, she's going to make sure you don't get hurt Rusty, is that okay with you?"

I said, "Would you mind turning to page 178 in my English & Literature book please?"

What are we suppose to read?

I would like for you to read a story I had to read for homework last night.

Rusty, cut this nonsense out. Place your hands on the table and look forward.

If you will read that page you will see where I bookmarked the curse word that I'm being accused of saying. I had never heard that word before reading it. If it's in my English book that means I'm being taught that word. If a great author can say it in anger, I should be able to say it."

Mr. Valcons opened the book. In the center of the page, separated out in the quotes, was,

The night before I had been assigned to read Edgar Allan Poe's, The Tell Tale Heart. While the animated short you see above does not contain this phrase, the version in my English book did.

My witness, a former English teacher, looked at the Assistant Principal ... they knew that I had a reasonable point. They knew that the two of them administering a paddling to me was wrong. They also knew that if my dad found out that I had been paddled for saying a word that my English book contained that he would be livid.

"Are you going to tell your father about this?"

My reply in a confident voice,

The first time my father will ever hear this story is by reading it here.

* the asterisk indicates a name was changed to protect the innocent. The principal and assistant principal's names were similar.

* a witness was required in public schools for all paddlings

They wanted to punish you for "damn"? That's barely even cussing.

Mind you, one of my teachers once tried to punish me for "crap", so I'm not that surprised.

Well ... yes and no JensonB

DAMN in the South of the United States used to be a VERY BAD word.

I've heard of students in England getting punished for saying "bloody", is that true?

It does happen sometimes, but it's usually just a case of the teacher yelling at them to watch their mouth, not a formal punishment. Schools like mine anyway. I have heard some of the stricter schools detain for it, though I haven't confirmed it.