Written Up, But Not Kept Down Pt II

A few weeks ago, I started a new post called, "Written Up, But Not Kept Down" ... a story about how I was a good kid, but managed to be written up 10 times in junior high and high school. In the first part, I laid the background for why I would get written up - mostly due to hatred for my father from scorned teachers.

Continuing today and this weekend, I'll tell two of my favorite stories I have about my high school days:

On the first day of orientation to my Junior High School, my principal laid out the rules in a student assembly. After talking about the dress code, conduct codes, and "the way things worked" at his school, he stated very sternly,

"I despise gum chewers and candy crunchers, it's a disease amongst you children and I don't like it. I have zero tolerance for eating when not in the lunch room cafeteria and I have an even lower tolerance for people who don't dispose of their unwanted food and candy properly.

He was a very well built strong man ... he held up up a desk with one hand exposing the bottom.

"See the bottom of this desk? It's clean. All desk undersides are to remain that way. If a teacher sees you placing gum under a desk, she is instructed to make you pick it back off and swallow it, you'll then clean all the desks in the classroom after school, you'll be sent to the office for a paddling, and your parents will be notified. But I'm sure you'll all be good, you look like a good bunch.

I worked for the annual staff. At my Junior High school this was actually considered an elective; called Publications. We mostly worked during a class period. We had six one hour periods of class in a day ... for me; this was 5th period.

The teacher for Publications was a rather husky black woman with a big bouffant hairdo. She had taught both of my older brothers English when they came through the same Junior High. She knew my dad well as she had been partially implicated in some impropriety that my father alleged a few years prior.

Publications was a rather boring class. I mostly played on the Mac Plus. I recorded things into system file sounds and when the teacher would come by I would count picas on a sheet of graph paper like I was figuring out how to lay out the annual. This class was full of over achievers so we were pretty much left on our own. We had a great annual staff supervisor - a very laid back 9th grader. 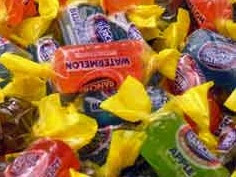 One day, read as just like every day, I had a watermelon Jolly Rancher in my mouth. The teacher saw me switch it from the left side to the right side of my mouth. She asked me with a stern voice, (speaking exactly as spelled)

Rusty, do you have candy in yo mouth?

"I done told you 'bout dat, lemme see yo mouth"

I opened my mouth to reveal a watermelon Jolly Rancher. She reached inside her desk and pulled out a disciplinary notice. It made a light kind of potato chip crunching sound as it wisped in the breeze from the drawer to the desk. It seemed to go in slow motion over her head and onto the desk with the pen crashing to the center to write down my offense. She wrote very quickly and said,

"I done told you 'bout dat, take dis up to tha office!"

I was scared. I didn't think there would be any way to get out of this. This was the principal's number one rule.

I grabbed the disciplinary slip, hung my head down and dragged my feet on the carpet. I walked slowly to the office. I straightened up, like a boxer about to fight and I cracked my back and tilted my head from side to side. I looked at the disciplinary notice. It stated my offense simply, on one line and in three words.

I smiled. I think I almost skipped up the steps to the office. I got up to the front desk and showed the secretary the disciplinary notice in my hand.

She went down a small hallway and then poked her head back from around the corner,

Mr. Jodd* said, "Goodness Rusty, what is it this time?"

I smiled and said, "I was eating candy in class."

I said, "Take a look at the disciplinary notice first!" 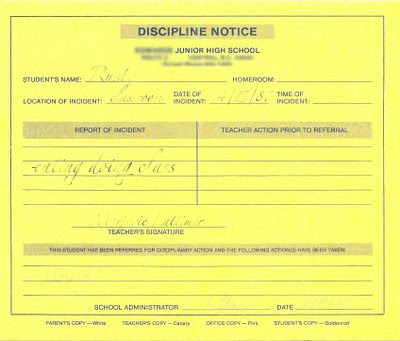 He read it out loud in a surprised voice exactly as spelled,

His mouth crumpled and his fist balled up. He gave me a message and said frustrated,

I returned to class. The teacher surprised to see me return so quickly said,

"What choo doin' back so quick?"

I replied snickering, "I don't know, but Mr. Jodd* wants to see you!"

The reply in a growling tone, "IN MY OFFICE!"

From that point on, I had Jolly Ranchers® in 5th period ... so did every one else.

* the asterisk indicates a name was changed to protect the innocent. The principal's name was similar with one syllable.