Written Up, But Not Kept Down 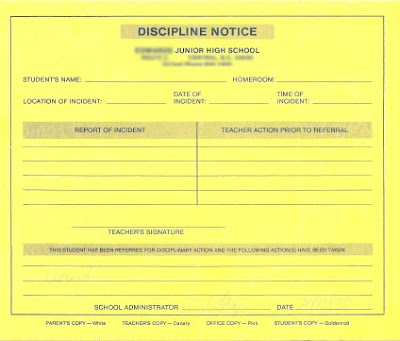 As some of my long time readers know ... I've always written ... I mean way back - even into 3rd grade. I've kept a journal just about all of my life of every week of my life ... most times ... every day. For more than 10 years now, I've been writing a blog in some form or another. (This one for 5 years)

Every now and then I like to share a personal story from my past. So here goes ...

I'll post this in 3 parts ... starting with this introduction and background.

My father was very outspoken in educational matters while I was in school. He still is to this day. To say that the teachers in my school district hated him would be an understatement. It's not the kind of hate such as, "He's a bad guy, he's a jerk". No, just about everyone who knows my father respects him and likes him and feels the uncontrollable urge to shake his hand. Teachers have the kind of hate for my father like Lex Luthor hates Superman.

Teachers in my school district were corrupt back in my day. The cliche, "Absolute power corrupts absolutely" certainly applies. My state has for many years tried WAY TOO HARD to figure out what's wrong with education. As time has passed this has given just about all political power in my state to the teachers.

My father had few allies in the school system. Fortunately, one of those allies was the principal of my junior high school. My father and my principal made a simple agreement. I was not to get preferential treatment, but any teacher complaint about me was to be personally scrutinized by my principal. Besides this fact, most teachers feared my father. I don't mean in the sense of death. I mean in the sense of "Oh my God here comes Mr. Smith". Kind of like Lex Luthor knew Superman was going to put him in jail with the Monday paper would read "Lex Luthor's plot to destroy Metropolis; Foiled by Superman .... Again!"

I can't emphasize enough that my father was not a meddler. I never have considered my father a person who likes to stir up trouble. I know a lot of parents who are complainers when it comes to their children in school. They pretend as if their children are perfect angels and how dare the teachers proclaim otherwise. My father wasn't this way. In fact, he would tell me often, "If you do something stupid, Rusty, you are stupid. You need to be smart. If you're smart, people will call you smart." (Yes, a lot like Forrest Gump, "Stupid is as stupid does.") He asked that I never be treated with any preference. I was not to be treated differently just because teachers knew he would say something. In fact, my father was usually on the lookout for other students that may be having problems because he was interested in their well being too. You also must understand that my father was never considered as complaining too much. Again, let's go back to the Superman/Lex Luthor analogy. A teacher complaining about my father fighting what 90% of the population would consider wrong; is like Lex Luthor complaining that Superman fighting his plot to rob the world's banks and declare himself world ruler; was wrong.