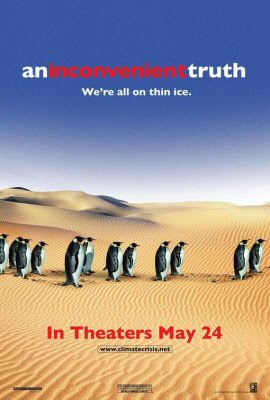 So ... Al Gore wins the Nobel Peace Prize for his movie and "efforts" in "An Inconvenient Truth"

Just about every "fact" that this movie tried to claim has been debunked by scientists. There is no such thing as man made Global Warming. Was the Ice Age also caused by man? Wasn't there warming after that? Was that caused by a rise in caveman fires? You need a real dose of reality if you believe there's such a thing as Global Warming. Do I believe the earth is warming up? Yes! Do I believe we should be environmentally concious? Yes!!

If you are Democrat or Republican or Independent ... you have been brainwashed by a bizarre group of people who want you to think that Global Warming is more than just an earth cycle. They want you to think that our distance from the sun, solar activity, volcanic activity, and the moon's slightly increasing distance from earth has had no affect on Global Warming at all. If you look at it closely, organizations and political interest groups that push this garbage are really pushing a New Age agenda - endowing humans with the powers of nature (and of God). This is a subtle way to diminish the relationship between religion and science.

I'm not loading some political opinion on you here. You have to understand that the majority of the Global Warming Gang wants YOUR MONEY! That's it. They want to sell you t-shirts and bumper stickers, rather than something tangible or useful.

I would highly recommend watching Pen & Teller's full episode on recycling - it's the best research and straightforward talk from anything I've ever seen or heard on the subject of recycling.

I recycle aluminum cans and of course I recycle older Apple computers into displays, servers, fish tanks, computers for kids and senior citizens, and bust Macs into parts for eBay sales <-- therefore recycling them. I also feel like I do my part by recycling ink jet & laser toner cartridges and using all of my paper to shred and reuse as packaging material. I don't feel like a hypocrit saying any of this. Unlike Gore.

I also have my car tweaked as much as possible to save as much gas as possible. I use an additive called ZMax. I have a device called a Tornado. I use premium spark plugs. I change my air filter often. I drive the most fuel efficient [nonHYBRID] SUV on the market. I average 31 MPG.

I'm not a hypocrit like Apple co-founder Steve Wozniak - I don't own a Toyota Prius and a Hummer. (The two cars that get the best and worst miles to the gallon for consumer available automoblies.)

* Al Gore is on the Apple Board Of Directors 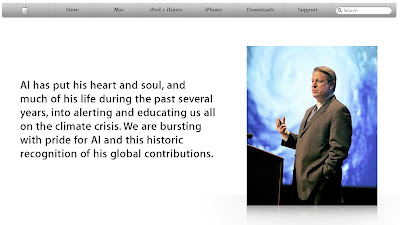 Email ThisBlogThis!Share to TwitterShare to FacebookShare to Pinterest
: Politics, Recycling

Thanks. You just saved me a blog entry.

By the way, don't know if you read The Devil's Kitchen, but here's a view of this from across the pond:

Thanks for the heads up ... I had read that aggregated and quoted on another site I believe. Good stuff.

It's a great lesson in selling something to the public.

I've linked to the debunking in this article. Where are your links?

Maybe they should rename the film "A Convenient Load Of Bull****"?

The reality is the majority of the scientific community agrees that this is indeed a fact.

Hmm, because their jobs depend on maintaining the GW myth?

Exactly Roget ... it's also not MOST scientists ... its about half - whatta you know right along political lines.

Sorry to not have included links. As for the opinion of the scientific community being split I suggest reading this entry in wikipedia. Please pay attention to the Dissenting Statements section which has the following "With the release of the revised statement by the American Association of Petroleum Geologists, no scientific bodies of national or international standing are known to reject the basic findings of human influence on recent climate.". None is a long way from half.

As far as claiming that scientist are in some grand conspiracy goes, that is just silly and there is no to debate to be had with someone who's basic response is "I just chose not to believe it".

First, if you look at who has edited that Wikipedia article; you find GREENPEACE and several known Greenpeace activists.

I do not believe it's a conspiracy either. I think SOME scientists and a LOT of people actually DO THINK man has had an influence on the climate.

The ONLY way we could possibly know if these theories are correct is waiting 100 years until say 2050 - (1950 could be considered the true beginning of worldwide industrialism) - if the climate is not averaged out and still cannot be attributed to solar flare cycles, moon distance, and volcanic activity - THEN I WILL start listening.

I do think Americans and the world population need to be more concious of their environment, but right now the quasi-religious aspect of this (and is IS A RELIGION) turning a lot of people who could make a difference away.

Sorry, the conspiracy comment was more directed as a response to roget's post since he dismissed what I said was a scientific consensus as basically a conspiracy to make money even though most climatologists that have studied the issue aren't profiting in any significant way. I should have been clear who my comment was directed at. My apologies.

The fact that it has been edited by Greenpeace doesn't change that there is indeed a scientific consensus. I am not a fan of Greenpeace as an organization. I think their first interest is the Greenpeace brand and secondly the environment. I stand by my claims that as far as scientific community goes there is no real debate on human impact on climate change. There is plenty on the extent of that impact and what can be done, but that is it.

I agree that a lot of people don't believe it, but the reality is that same group of people are as qualified as I am to jump into the scientific debate. I would also hazard a guess that the issue has caught on with more than 50% of the population, but I think that is harder to really figure out.

I agree the only way we can 100% without a doubt sure is to do nothing and wait and certainly the question is do we take precaution now or just wait it out. Obviously you are in the wait it out camp which is fine by me and I am in the other.

Actually ... I think I make it pretty clear in the article that I'm not a hypocrit. If I were just "waiting" it out I'd throw away everything without any regard as to whether it could be recycled or not.

A scientific consensus on the environment is like a political poll. The results are skewed to say whatever they want the poll to say.

MOST SCHOLARS I have spoken to or seen ... are of the opinion it is next to impossible for there to be a human impact and that patterns of weather last 25-50 years.

I really encourage you to watch the Pen & Teller episode of "Bullshit: Recycling" that I mention here. They are very honest about what worked and what doesn't and it's impact on the environment.

The professor (in the P&T video) is from a local (to me) university and he has been making a strong case against a lot of the recycling movement for years - saying it's better for providing jobs and for conserving resources - but actually the recycling movement harms the environment 2 fold. As an example: As cars have become lighter to save on fuel economy - more plastic has to be produced which pollutes twice as much as steel/metal body panels.

vegancowboy,
I didn't say what I said just to get a rise out of you.
I genuinely suspect the motives of some involved in this topic.

These scientists are PAID to produce these damning reports. It is in their interest to maintain the scare.

I have been 'green' long before it was trendy to be green. I have no doubt that man is making an impact on the planet but I am fed up with every natural disaster being blamed on global warming. The politicians roll out the GW card too often and it has had the result that I am now suffering from GW fatigue. Along with many other folk who may have a 'green core' I suspect...

I'm with Roget ... I've been doing the whole recycling what is GREEN TO RECYCLE and conserving resources and buying recycled just about all of my life. However, I do NOT want to be told what to think and taxed to force me to recycle.

Roget is right ... scientists are paid to publish these reports. Greenpeace thrives on the news and sells more bumper stickers.