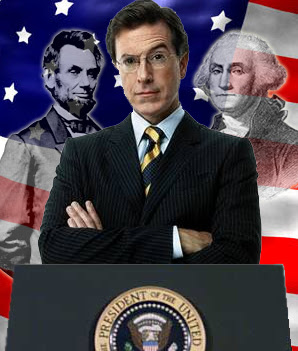 Stephen Colbert announced on The Daily Show that he's officially considering whether he will announce that he's running for President of the United States.

He said he might be trying for the ticket in his home state of South Carolina.

The interesting thing is ... I would consider voting for him. I would love to see what a State Of The Union address would be like with Colbert.

And he's from my home state of South Carolina ... something I didn't know.

* For those of you wondering ... this IS NOT a joke. Colbert IS REALLY considering running.

More to come about this ...

Email ThisBlogThis!Share to TwitterShare to FacebookShare to Pinterest
: Colbert Report

Even though his satire is to make fun of Republicans in a reverse psychology kinda way ... I have to agree. If he becomes serious and will run ... I really think he would have a serious shot