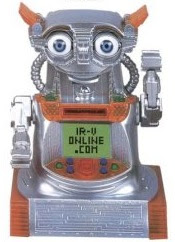 Over the weekend I found an interesting toy from 2001 called IR-V.

He was in the packaging and apparently worked with Macs as the user on the back of the packaging clearly has an Apple logo keyboard and is clearly using an Apple ADB mouse. (The monitor is Sony, the speakers are generic) 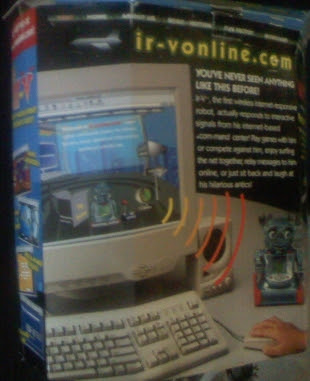 The package has a slogan:

That should be two asterisks (**) instead of exclamation points (!!).

First off ... there's nothing really wireless about the robot. He apparently reacts to sounds and maybe IR signals that come from the IR-VONLINE.COM website which no longer resolves. I guess that shows how popular this toy was.

Second, he doesn't work with Macs eventhough the advertising is clearly showing the Mac OS, Internet Explorer for Macs, and Apple hardware controlling the robot. Here's a scan of the manual 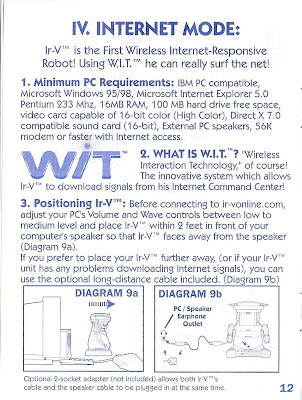 NONE OF THIS COMPATIBILITY is mentioned on the outside of the package.

I wonder if anyone has ever sued because a package indicated Mac compatibility in the advertising but the actual product inside did not work with Macs. I suppose the statute of limitations has run out on this toy.

There is a small disclaimer on the box that reads:

Actual product may differ slightly from the photographs and infomercials

The box also has this little piece of pop culture candy goodness:

"Wireless Interaction Technology" of course! An innovative system which allows Ir-V™ to download real-time signals from the internet!

There was a whole company (now defunct) formed around this robot. The company was located in Cottontown Tennessee USA. Honestly I think they should be ashamed for ever stealing venture capital.

He'll still make a good addition to my collection.

Email ThisBlogThis!Share to TwitterShare to FacebookShare to Pinterest
: Robots

Hail! greetings from Brazil!
I just found out that the Brazilian website is still online (didn´t even knew that was one).
I won one of these robots long time ago, but back then the ir-vonline website was already down, I could not test it because I have no batteries for the robot, but I think it´s worth the try.

It´s in portuguese, but you can use the Google translator, works very well.