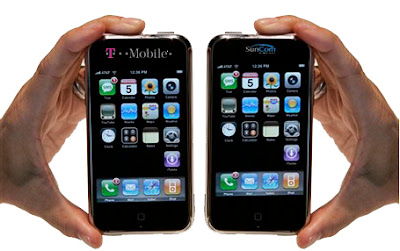 Well ... it finally came true ... in less than 3 months several sources have come out (some paid, some free) to unlock your iPhone to use on any carrier such as T-Mobile or SunCom.

A few notes for the wiser Mac users among us:

* Even though Apple has officially stated that it is neutral concerning hacks and third party applications for the iPhone ... don't take this as an endorsement. In fact take this as a "we don't like it, but we're not going to prohibit you from having fun until the next software update" kind of statement.

* You would be foolish to pay the iPhoneSIMFree's $100 to get your iPhone unlocked for several reasons. 1) They offer no warranty that it won't cause abnormal behavior on your iPhone 2) They make no warranty that the "hack" will continue to function after the next software update 3) They will NOT provide a refund of ANY kind

* Know that if you activate the iPhone on a network other than AT&T you are cheating Apple out of revenue - supposedly Apple is receiving a percentage of the monthly contract revenue. This may not concern you because you may think you are "sticking it to the man" - well you also make it more difficult for Apple to make partnerships with the jerks in suits at large mega corporations that own and distribute media and technology. (Think MPAA/RIAA)

* Apple will most likely release a MAJOR software update soon that will add new functionality to the iPhone - a feature that will have the entire internet buzzing for weeks. I am in the know of a cool new application for bluetooth with the iPhone that will amaze everyone and sell iPhones like crazy - even more so than the $200 price drop.

* With everything said ... know that unlocking your iPhone is NOT illegal in ANY WAY whatsoever. As an end user of these hacks YOU are not reverse engineering anything and YOU are not breaking ANY law. See this article that explains your rights in detail.

Good post, especially regarding rights. I just don't understand why anyone would do it:

- If you have no AT&T coverage where you live, OK.

- If you go overseas a lot and want to avoid the int'l roaming, OK.

But the above two gotta be pretty small slices of the iPhone user base.

If you just want the non-phone features you can get most of them in the iPod touch; If that was a reason before I think it ceases to be one now.

Meanwhile, anyone who pays $100 for this is borderline insane, in my opinion. If you're gonna do it, at least go with a free alternative.

Oh, and what's with all this pseudo name-dropping about Apple "higher ups" and being "in the know" about new stuff? Until a week ago I didn't know you were such a cog in the Apple wheel. :-)

I'm not name dropping really, I just know a few people in Apple and this blog gets more attention than some may think. Besides ... this is my blog ... which aren't these blogs about egos anyway?

I do tend to name drop ... but I also pride myself in being in the know.