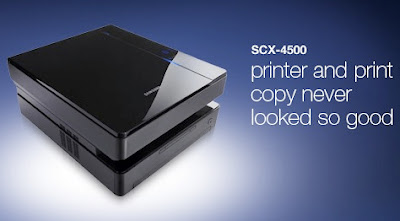 Samsung Electronics America, Inc., the world's second largest manufacturer of laser printers, has announced that its ultra-compact monochrome laser printer, the ML-1630, and multifunction printer, the SCX-4500, will be available exclusively at Apple Retail Stores nationwide and online at http://www.Apple.com

This deal will give Apple customers a 3 month window to own the printers until they are widely released in January of 2008.

A couple of notes about Samsung printers:

* I have owned two Samsung laser printers and BOTH printers have had the toner cartridge discontinued and made nearly impossible to find at retail.

* The print quality on one of the laser printers I owned (which was Samsung's highest end multi-function) was ok ... but not even close to HP's low end available for the Mac.

* Today's high end inkjet printers are not only just as stylish but I know of hardly anyone that can tell the difference between a laser print and an inkjet print nowadays.

* This sounds to me like Samsung is going to use Apple users as guinea pigs not as a reward for being a different level of consumer.

This is a great post. I was going to post on this myself yesterday, but I was too fatigued as is often the case.

The units may not look quite as sexy as Paris Hilton, but they are, none-the-less, very nice looking.... almost 'Apple like' in their appearance. The lines are so Spartan and clean looking, again, dare I say sexy?

I have never owned a Samsung printer, so I really can't comment on their output quality like yourself, but I will say that I don't doubt that HP has better quality, even at the low end. The printer I now own, an HP all-in-one, is now three years old and, after all these years, the hardware still looks and performs as did the day I brought it home.

The only thing I can say about the new Samsung 'black beauty' printers, is that I find them to look sexy, like Paris Hilton, but apparently, from your experience, like Paris ........ they don't act too good either. Let's hope that, like Paris Hilton, Samsung is planning to act better (performance wise) in the future too.

I too have an HP All In One - and although I switch regularly because I get new printers in to test all the time - my HP ALL IN ONE is great.

It seem quite fashionable to bash HP printers nowadays. However, I ALWAYS come back to them even if I try something else.

The current HP DJ 5850 (wireless) is the best printer I've ever owned. By far. It worked seamlessly with my XP laptop, and just as seamlessly (even more so, since Bonjour lets me see ink levels) with my new iMac. If I rated the Top 3 printers I've had they'd all be HPs.