I'm not upset as a buyer, but as a shareholder 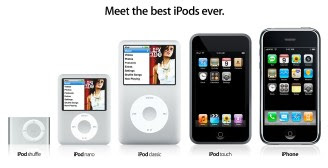 I just wanted to say something quick and simple about the iPod announcements yesterday.

First, I think Apple could have done a better job with the design of the "iPod Touch" - it's an iPhone without the cellphone. I think that's A HUGE MISTAKE. They should just give the iPhone an easy non activatable option ... then I'm sure a few people would actually decide, once bought, to get cell phone service.

Second, I love the iPod Classic's storage capacity of 160GB. The iPod makes a great battery powered backup drive. I might consider getting one of these.

Third, the Nano" Fatty" is ugly and no longer a Nano - they shoulda just come up with a new name. Nano "Crunk Edition" (just kidding)

That's not just a $200 price drop ... it's a $212 price drop if you add in tax (even more if your state has a higher tax rate than mine). I'm going to investigate my credit card's price protection plan ... I think it covers 90 days. Apple's price protection covers 14 days ... so if you bought your iPhone in the last 14 days ... make sure you call 1-800-SOS-APPL immediately to get your credit. Apple doesn't automatically credit this "price protection".

John Gruber had an interesting point that I I suppose I agree with ...

(And for those of you who’ve already bought one and are pissed about the price cut, if you didn’t think the iPhone was worth $599, you shouldn’t have bought it. That’s how supply and demand works.)

I do expect Apple to treat me like a loyal Apple customer who waits in lines and follows their every move with my breath held, while avoiding obsessive fanaticism ... rather than like an oil company who could care less about it's customers and knows that they can charge whatever they want to and the customers will still buy.

He also mentioned this:

I wonder about the 30-day refund period, though — the $200 cut is far more than the restocking fee.

... one DF reader who bought an iPhone in early August reports that he called Apple and they offered him a $100 refund. Anyone else corroborate this?

I maybe could have understood this price drop closer to Christmas, but I think the drop so soon after introduction was a slap in the face; making some feel like losers for waiting in line for hours and going through the "kinks period" and two software updates.

I'm also slightly upset as a shareholder. While I own a miniscule amount of Apple stock - I'm slightly perturbed by this business decision. I would like Apple to make as much money as the market is willing to bear ... I say that is only $100 in a price drop ... not $200! Plus the speculation (however false that speculation may be) is that Apple is not selling iPhones well, hence the price drop. I doubt there would have been this chatter had Apple dropped the price $50 or even $100.

Well, we disagree here. I think Apple hit home runs yesterday. Making the touch as an iPhone that could be activated as a phone would mean that all the phone circuitry would have to be there whether the user wanted it or not (pesumably, not). That would make no sense to me.

The nano looks great in the commercial as far as I'm concerned. I do wonder abou its width for some docing devices, though. Need to see it in person for that. Bottom line is that I'm amazed at what $149 will get you in an iPod now.

As for the price drop, we disagree there, too. I'm sorry about what you had to sell, but it's the nature of the tech beast. There's no rule tht says the price can't drop in 68 days; Christmas season is here and Apple wants to make a killing. They will.

See here for my thoughts on the announcements in general:

And see here for my thoughts on this "early adapters got ripped off" stuff:

I agree with you 100%! They should have done what you said, give people a device that could be activated and upgraded, if desired, into a full fledge iPhone.

I also agreed with you on the price drop. $100 would have done it. But $200 caused a knee-jerk reaction and the stock market drove down Apple's market cap big time. I'm sure it will recover, but thats not the point, it was pointless to begin with!

The Fatty Nano is just that... fat! It does sort of grow on you, but I'm not exactly jumping up and down for joy because of it.

The iPod Touch I may actually buy since I can't buy a iPhone here in Canada yet. The idea that it costs just as much as an iPhone, however, is hard to grasp. Maybe that's what Apple wants... get iPod owners to buy iPhones instead?

Oh well, it gave me something to blog about on my little blog.

In-conclusion, Apple could have handled the whole thing much better than they did. The iPod, iPhone will be great success's, but the Nano (El Fatso) I'm a little worried about.

Hey, I'm unhappy because they didn't put the 160 GB hard drive in the iPod Touch or even offer it as a premium CTO. Unfortunately, Apple never listens to me or gives me exactly what I want.
As a long-term shareholder I just have to put up with what they do. They're probably better equipped to know how to run a company than I am. I'm more disappointed with easily spooked investors than I am with Apple. Still for the past couple of years, Apple stock has easily paid for all the Apple gadgets (MacBook Pro and iPod 5G) I've purchased and will purchase in the near future so I really don't have anything to gripe about. Apple doesn't control what I buy from Apple. I take responsibility for my own decisions.

"I do expect Apple to treat me like a loyal Apple customer who waits in lines and follows their every move with my breath held, while avoiding obsessive fanaticism..."

That's high-larious. You just defined obsessive fanaticism while trying to deny it.

Anony: Apparently you missed the sarcasm in that statement

Tom: It's not the nature of the tech beast - Apple has ALWAYS bucked this trend. While technology gets better - the price points have almost NEVER dropped for Macs. I would have been very happy with the introduction of an 8 and a 16GB iPhone - price points the same or a lower price.

Point is, I'm happy but I have 9 of the 37 people that bought iPhones specifically from me on the week of introduction - to call and ask what's up! Not to mention all the teasing I've gotten for being an idiot who paid $600 for a $400 phone.

Early Adopters should not, I repeat NOT expect any current/future iPhone buyers to feel sorry for them.

Basically, you're saying that Apple should deny me a chance to buy an iPhone at a better price for a few months longer, for no other reason than to make YOU feel better.

Switch shoes with me and ask me where your sympathies would lie.

Maybe this will also teach the Apple Obsessives a lesson about going out and embarassing The Rest Of Us in public, in forums, and on blogs. We are all tired of being tarred with the more idiotic things you guys do--like getting in line days early to pay too much for a product that isn't even in short supply.

This whole price-drop thing was Steve's way to finally deliver his Shatner-at-the-Star-Trek-convention-get-out-of-your-mom's-basement-and-get-a-date-speech. Take it to heart.

Trust me .. I appreciate the price drop and I would love for a lot more people to own the iPhone ... I feel great about my purchase ... I still think it was a slap in the face and obviously Steve sees this now ..IE the decision to give iPhone customers a $100 credit at the Apple store.

Steve must have felt sorry for y'all...