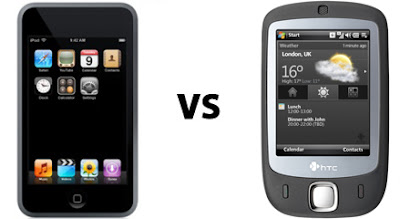 Remember [the lawsuit] between Apple and Cisco over the "iPhone" trademark? ... [Now it's a large] Taiwan-national with Microsoft in its pocket: HTC, and their HTC Touch [versus] Apple, and their iPod touch.

Peter Chou, CEO & president of HTC, [reminded] the press that HTC has registered "Touch" as a worldwide trademark and is "proud to share the same vision as Apple over touch screen functions." While he wouldn't comment on whether HTC would take legal action against Apple, HTC's Marketing Manager Ching-hung Wang was happy to talk around the issue by noting Apple's and Cisco's ability to "reach a mutually satisfactory agreement" before, while footnoting the need for "further observation" around the "Touch" trademark rights question. Translated: Hey Apple, we think HTC is waiting for your call. Maybe you should make it a party line too so that Creative can bring their Zen Touch? 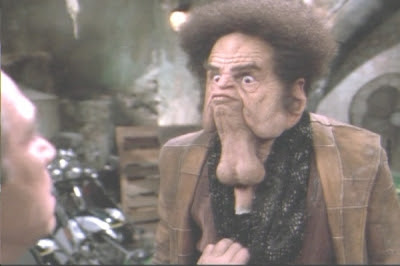 I doubt HTC will make much of a deal about this because it appears as if they ripped off a few "interface elements" of the iPhone.

Email ThisBlogThis!Share to TwitterShare to FacebookShare to Pinterest
: iPod, Lawsuits

And isn't this a bit like Creative trying to sue Apple for using the word "nano" with the result that many felt that it is not possible to trademark a word which is so widely used in the English language.

Now if Apple had used the word "TyTN" (another HTC product) then they might have a chance.....

The two products have different names. iPod Touch and Touch.

Besides which, I'm pretty sure very few trademarks of generic words hold up.

Jenson,
Apple doesn't use "Touch" - as with their other products they don't use a capital first letter in the suffix name - mini, nano, shuffle, classic, touch...

Maybe they realise that just using the suffix word as it is used in everyday language makes it harder for such claims of TM infringement?

Roget, I don't think the capitalisation of the word has any bearing on what I said, the two products have different names. It doesn't matter. You cannot TM a word so popularly used in the general English language.

Roget ... I'm going to side w/ JensonB on that ... for HTC to think they have any kind of claim for infringement would not only be a stretch but frivolous.