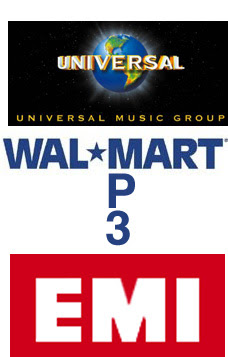 Walmart, today, started selling DRM free music on it's website - available for download. The interesting catch is it's not in AAC format like Apple's DRM free music. The other interesting piece here is the price. "Thousands of albums and songs" from both EMI & Universal are priced at $0.94 per track or $9.22 per album.

Universal has refused to offer Apple the "right" to sell its library DRM-free and has even been public about offering DRM-free tracks to everyone BUT Apple.

What is the point behind this? How could excluding yourself from the largest segment of the market (iTunes downloads account for 78% of all legal music downloads) be a wise business decision?

I'm estimating here ... but I would say Walmart may be making $0.03 cents or less on each song sold DRM-free. This is probably why Universal likes the deal so much. They don't want anyone BUT Universal making a profit.

These, DRM-free music downloads, are suppose to be another way the record companies are trying to curb piracy.

How serious are the music companies about stopping piracy and illegal downloads?

GOOGLE [Type in: "how do I report music piracy?"]

None of these sites or searches will yield results about how to report music piracy. NONE of these sites offer an easy way to report violations from people like you and me. With this small website [Fix Your Thinking] I get DOZENS of reports each month about people scamming in the eBay & Macintosh communities - imagine what kind of leads people would provide to the music companies and to the RIAA?

I'm a strong believer in Peer-to-Peer sharing of music. I believe it is the best form of promotion and the best way for artists to maintain and build interest in their music. This music is distributed freely. I do not believe in "flea market sellers" selling copied CDs and DVDs for profit.

I have wanted to report several sellers at my local flea market - but there's no way TO report an offender ... many flea market owners encourage pirated media sales and even sell pirated CDs and DVDs themselves ... this is how serious the music industry is about piracy!

Supposedly, Universal claims iTunes is being used as the "control group" since iTunes continues to sell Universal music, just with copy protection. It's plausible, but it's more likely they're trying to seed a new ecosystem for downloadable music stores so they will have somebody to play off iTunes at negotiation time. Unfortunately, WalMart makes a lousy opponent for iTunes, what with its insistance on things being "family friendly" leading to it refusing to sell certain edgier items. It's the same reason Netflix ate Blockbuster's lunch -- no content restrictions at Netflix compared to Blockbuster's "no NC-17 or X rated movies."

Oh, and one more thing... You'll need to be running IE under XP or Vista to buy songs from the Wall Mart online store. So much for a "control group" since that leaves most Mac users out.

Another thing to note, I read that Universal's MP3s are heavily watermarked, not like like the simple admin info in iTunes' DRM free tracks. So, are the Universal tracks really DRM free? Maybe, but the songs are permanently tied to you. Just you. Only you.

Is it just me, or does this creep out anyone else?

Refusal to license iTunes to sell DRM by Universal sounds not only childish but a 'Restriction of Trade' which I was under the impression is ILEGAL!'

According to the L.A. Times it may come back to bite them as it could actually help Apple more than hurt them!

I think it will be deemed illegal when or if Universal decides to "renegotiate" with Apple.