I'm sorry posting has been light over the last week after I promised I would be back in full swing.

[edited] I'm a little shaken up after witnessing a man that wiped out on a moped (that wasn't wearing helmet) die right in front of me yesterday.

Looks like Apple legal is going to be busy (as if they aren't already) ...

A Des Moines, Iowa, surgeon claims that the touch keyboard on the iPhone violates a patent he holds through a company called SP Technologies.

A man in Michigan, claims Apple has violated patents he owns for the inclusion of status lights on rechargeable laptop batteries. If his claim proves successful, Apple could find themselves accounting for lost profits and paying triple the awarded amount for the patent infringement.

My question is: Does Dell pay this man a licensing fee? Some Dell batteries also have led indicators on them. I've got one right here in front of me. 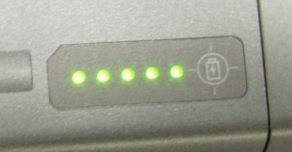 A class action lawsuit was filed against Apple yesterday in a Florida federal court alleging violations of the Fair Credit Reporting Act (FCRA) that put Apple customers at risk for identity theft.

According to the suit this violates a 2003 amendment to the FCRA which states: "No person that accepts credit cards or debit cards for the transaction of business shall print more than the last five digits of the card number or the expiration date upon any receipt provided to the card holder at the point of sale or transaction."

[credit for lawsuits descriptions to InformationWeek]

Email ThisBlogThis!Share to TwitterShare to FacebookShare to Pinterest
: Lawsuits

I could have gone the rest of my life without reading your opening paragraph, but then again I have a hard time watching an episode of ER. :)

Seriously, what a horrible thing to have witnessed.

As for the lawsuits, they've replaced hard work and diligence as the American Way.


From www.informationweek.com
You'd think physician Peter V. Boesen would want his lawyers spending most of their time appealing his prison sentence.

Boesen, a Des Moines, Iowa, surgeon recently sentenced to 51 months in federal penitentiary for healthcare fraud, is suing Apple. He's alleging that the touch keyboard on the computer maker's iPhone PDA violates a patent he holds through a company called SP Technologies.

FCRA:
They worry about that but I bet they gladly hand over their cards at restaurants etc for possible skimming and other fraudulent practices....

Good point about the card skimming ...

And thanks for the Jack Campbell-esque background on the doctor.