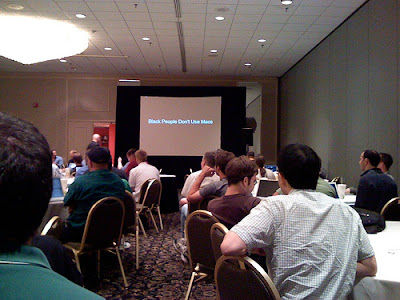 An interesting topic that I hoped to one day cover here on this blog was discussed by Open Source Advocate/Mac User notable; DrunkenBatman. You may remember DrunkenBatman from outting the guys over at CherryOS for stealing Open Source code and using it as their own.

In my 10 years selling Macs - 10 YEARS!!!! ... I have only sold one used Mac to a black person. Two years ago, I sold Final Cut Pro to a black couple starting a wedding video business ... that is ALL!

I'm not sure what was said, as Gruber seems to be one of only a few really summarizing this ... but I have hard facts. I make about 4 sales a week and visit 9-10 businesses and homes a week. I see greater than 500 customers a year. I think my sampling of Mac users is certainly valid.

Here's John Gruber of Daring Fireball with his summary of DrunkenBatman's Blacks & Macs:

Several panelists and audience members disputed DrunkenBatman’s basic premise. One audience member spoke up with his observation that at Macworld Expo, the largest gathering of Mac users in the U.S., there are plenty of black people. Drunkenbatman responded by turning up the hyperbole. As I transcribed it in my notebook, he said: “The only black people at Macworld are outside begging for change.”

[ FixYourThinking Note: One of the ONLY black people I remember seeing at MacWorld was Sinbad. ]

Gruber: Racial diversity is a legitimate and important topic (although I question whether it was a good topic for this panel at this conference). Some truths are uncomfortable, and the only way to get at them is through uncomfortable discussions. DrunkenBatman’s “begging for change” statement, however, was neither true nor simply a controversial opinion. It was stupid.

[ FixYourThinking Note: But I don't see Gruber saying, "Well I remember this specific person or that one. I mean blacks are 13% of the population - that means out of the tens of thousands of MacWorld attendees - some should be noticeable. And truly, my San Francisco experience was poor - 75% or better of the beggars/homeless on the streets near the Moscone Center (where MacWorld Expos are held) ARE black or so it seemed ]

Gruber: It was an exaggeration intended to emphasize his implied thesis, which is that black people, in general, are under-represented in the Mac community compared to the communities surrounding other OS platforms. I don’t know whether that’s true; I hope it’s not, but I don’t know. When opinions run as hot as they can regarding an issue such as racial diversity, it’s essential to argue with as many facts as possible — and but alas, DrunkenBatman had no numbers to cite.

[ FixYourThinking Note: He didn't need numbers ... it's an observable fact ... although I think I have given some answers here ]

Look at the picture Gruber has ... notice any particular race missing?

Out of ANY Mac site I think I am the ONLY one to quote Martin Luther King Jr. on every page:

"Injustice any where is a threat to justice every where"

So ... I certainly don't bring this topic up because I'm racist ... I have always found it interesting.

I'll have more to say on this at a later date ... I'll contact DrunkenBatman and give you a brief poll of fellow Apple Consultants in my area.

[UPDATE] More comments here: DrunkenBatman is NOT a racist!

Email ThisBlogThis!Share to TwitterShare to FacebookShare to Pinterest
: comments, Politics

Look, get an education or get a proofreader. Jeez, fixyourthinking, indeed.

I'm not seeing any errors other than my "different" writing style.

Please be more specific with your critiques.

well i am a black guy and i have loved the mac platform since 1998 when i got my first beige G3.

having 3 years experience with Verizon Wireless Customer Support, self taught bluetooth config expert, and working with a major mac hardware repair vendor in the Chicago area, and complete with non-commissioned sales experience + highly commended customer service [judged by customers writing back into VZW to say "i liked working with THAT GUY (me)]

not only am i a mac fan, macsurfer daily reader and unfortunatly BLACK , i get my friends to go to the local apple store too.

everybody says the same thing to me "how come you dont just work for APPLE?"

and i have to tell them after 2 interviews and 7 years of applying all i got was an email that said "they were pursuing more qualified applicants."

tuff noodles for me.

i have often wondered if i had multi facial peircings and blue dredlocks + burkinstocks and couldnt tell the difference between an 8core mac pro and an ipod shuffle if maybe i would have a better chance at getting hired.

maybe i need to loose this pudgy tummy?

I have seen all ethnicities at Mac World over the years I have been attending.

There are some who like to make something out of nothing......

I seem to recall this allegation being made before about Apple's advertising never including any black persons.

I don't mind if you wish to discuss the subject and garner opinion or views of black Mac users but what does it matter if blacks don't use Macs?
What does it matter what color your skin is or what platform you use?

Actually Roget ... it matters to me

Blacks have money just like any other race. Why can't I sell to them? What is Apple (What am I) doing wrong to market to them?

I have always wondered about this?

Why are there fewer black Apple specific programmers? Are there ANY of note?

It's not a matter of me caring for the demographic numbers or even debating race - I want to know how to market to the group - it's obviously an untapped market.

I see plenty of black persons in other stores, just not in the Apple store.

I have to drive about 90 mins to my nearest Apple Store (which I visited about 3 weeks ago) and while the store was not bursting at the seams it was busy. And - SHOCK HORROR!!!- there were black people in the store.

In fact I would say that about 25% of the customers, or browsers, were black.

Now whether they were just window shopping I don't, know but I find this desire to break down users into racial groups a little sad.

Blacks do use Apple products just as do whites, Asians, etc etc. If the black dollar is that important to you fair enough.

Roget it's not about busting into racial groups ... I (nor do I think DrunkenBatman) was even really wanting to start a racial debate - it's all about economics. I have now from 3 fellow Apple consultants and the local CompUSA (store in a store) Rep - that very very few black people buy Macs.

I'm not even talking about Apple Store visits or mall walkers - I see plenty of black people looking at Apple stuff in stores ... I'm talking about buying.

Actually how many Celebs in this listing are black?

Thanks again to Roget Roving Reporter!

To Anonymous in Chicago:
Dunno why you can't get a job with Apple, it's not like there aren't Black people that work there. I've seen quite a few, all I can say is keep trying.

I can't comment on why it doesn't seem as if more Black people use Macs, or why it seems difficult to point to a Black person who is a famous developer on the platform. Honestly, I can't think of any that are famous developers on the other platforms either.

I think it comes down to the "coolness factor" - Comp Sci and related professions are seen as "nerd jobs". If your an inner city kid (regardless of race) being a nerd is the last thing you want to be seen as. Additionally, as an inner city kid, you want to fit in - if your friends all have PCs, you don't want to be the only kid on the block with a Mac or that prefers them.

Minorities tend to have a higher representation in the inner city, which means that a larger percentage of minorities end up being steered away from "nerd jobs" and conform to their peers - which means a preference for PCs.

Maybe I'm wrong, I'm just taking an educated guess here. But if seems plausible. So if you want to see more minorities in the computer industry in general, then breaking the cycle of the poor in the inner cities seems to be the best way to do it

The black MacBook is very popular.

Your observations are not "hard evidence." It is anecdotal evidence, and is totally unreliable, and should not be used as data.

Find some real figures, and maybe we can discuss this. Basing the discussion on personal anecdotes like "I haven't seen many black people" is totally pointless and countrproductive.

If you will read the comments I polled two other Mac consultants in my area AND the local CompUSA Apple Store within a store Rep - my area (in South Carolina) has a 22% black population (9% higher than the national average) The CompUSA Rep said that he has sold 1 Mac to 1 black person all this month. This is the busiest time of the year for Mac sales. The other two Mac consultants could only tell me of 3 THIS entire year. Inarguably I do the MOST business locally of any local Mac consultant.

One other fact about my area ... the median income here is $44,000. The ONLY observation that I think I could make is that while we certainly have poor black neighborhoods .... there seems to be a lot of wealthy blacks in the area as well.

I am a Black American, I have neen using macs for over 7 years, I own 4 macs and have sold macs (I am an Authorized Agent) to Blacks, Whites, and Latinos.

By the way, my most recent mac convert is my son-in-law that is of mixed heritage...Black/Chinese.

You can now update your data concerning Blacks and macs.

I forgot...I also have an iPhone.

Thank you ... but honestly you are the exception to the rule ... since posting this I have come across a good bit of evidence indicating what DrunkenBatman said was true ... it has nothing to do with racism ... which is what you seem to be indicating ... like you are offended that someone would point this out.

That's not the case ... I want everyone from all races, genders, creeds, and poltical backgrounds to use Macs.