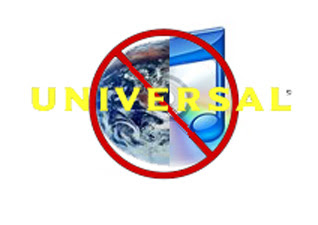 Looks like a pillar of iTunes content might be on the brink of collapse -- Universal Music, the world's largest music business, has officially opted not to renew its contract with Apple for vending music on the iTunes Music Store. We don't know specifically what caused Universal to turn away -- perhaps it's the weight of the rising anti-DRM movement among consumers, or perhaps it's because of [Apple's] brash negotiating tactics, continual refusal to hand over iPod cash, or oceanic persistence in keeping tracks locked in at $0.99. Whatever the reason, we can't say we're all that surprised; Universal's been a pain in Apple's [side] for years now. So what's the end result? Well, Universal music will still be sold through iTunes at will, so that means consumers can keep buying tracks for the time being, but Apple runs the risk of losing Universal's content on very short notice if the companies don't make happy with one another and put pen to paper once more.

This seems ridiculous. I hope Apple reveals the revenue Universal receives from iTunes publicly. I also hope that this prompts a mass exodus from Universal artists. Furthermore, if this persists ... I hope it results in a boycott on all Universal movies (too bad because Knocked Up & Evan Almighty are good), television (NBC - goodbye Jay Leno), and theme parks (I didn't much care for Universal Orlando when I was there in April any way).

I'm quite serious about a boycott ... if this moves forward - I sincerely hope that all Mac blogs will latch onto this idea and promote it amongst their reader base ... although I would imagine it will take someone like John Gruber to make the suggestion for there to be a real organization of the masses.