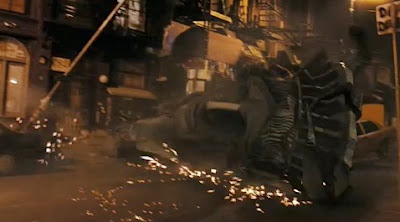 If any of you went to see Transformers ... and made it in time to see the previews OR if you've been reading the buzz on the internet about a new movie preview trailer that ran just before Transformers ... called (tentatively) 1-18-08. Some sites are calling it Cloverfield. It's a new movie produced by J.J. Abrams of LOST fame. A website is now up:

Oddly, one of the photos on the www.1-18-08.com is actually the same girl and not a real photo.

Watch The trailer on APPLE.COM

The trailer contains one of the most shocking visuals I have ever seen ... hmmmm ... right next to the plane separating in Lost (on TV) or the World Trade Center Towers getting hit on September 11 2001.

Some movie news websites are saying it is most likely based on the strange story, Cthulhu by H.P. Lovecraft

The teaser footage is shot with a hand-held camera to emulate a home-movie style. The teaser did not reveal the name of the film, but it showed a release date of January 18, 2008 for the film.

What if this is ACTUALLY the finale of LOST ... it would be a unique way to end a television series by having it in movie theaters ... wouldn't you agree?

This possibly relates to the giant statue that we saw a part of at the end of Season 2 of LOST. 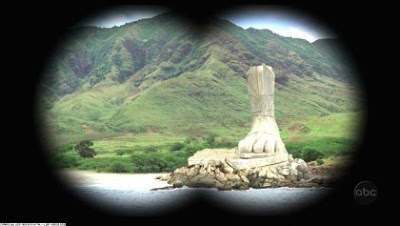 Heck, even if the the next season ends poorly ... I would go just to see that visual of the Statue of Liberty head hurdling through the air and landing on 5th ave.

I think it would be perfect for this series because of the unique story line LOST has given to show followers. I think this would be the first time a TV series was ended in theaters.

These biblical verses have been uncovered:

From the Book of Revelation, 18:08: "Therefore shall her plagues come in one day, death, and mourning, and famine; and she shall be utterly burned with fire: for strong is the Lord God who judgeth her."

LOST has alluded in the last season that if the island is "revealed", it may be the end of the world.

Some how ... the website; Slusho is related to this movie - it's under construction, very weird, and on a T Shirt on a character seen in the preview trailer.

* After reviewing the wikipedia entry for this ... this theory may have already been tossed around else where on LOST forums.

Hye moron Lost isn't going to end for another 3 seasons...

Did you ever think it could be some misdirection?

1.They hye was obviously intended to be hey.

2.EVERYONE knows that it isn't going to be the lost finale.

3.It isn't even related to lost.

4.It's not Cthulhu either.

EVERYONE but no link ... interesting.

Star trek with the orgina cast was a TV show that ended in movie form........so scratch that comment

The Star Trek movie came out as the last season of the show?

Star Trek was popular when the movie came out?