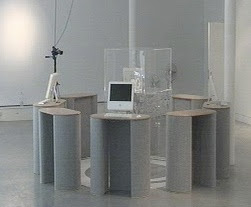 If you haven't been paying attention, some "scientists" in Ireland under the name "STEORN" have been making waves over the last year or so - promising a completely "Free" energy source. It's explanation defied the laws of physics - it's potential to be the greatest invention of all time was an understatement.

Yesterday, Steorn was to give their first public demonstration of the device. The "Device" is apparently controlled with an "Apple iMac".

Well, as one might expect ... the device failed to function and the exhibition was cancelled.

I have to say I have never seen ANY major scientific exhibition run or controlled with an Apple computer. I know it's done. I know most of the human genome was deciphered on Apple computers. I also know that MIT's Artificial Intelligence project known as KIZMIT is run with Apple computers - but it made it even less plausible for Steorn to show an Apple computer running their "device". Mac users know ... that kind of thing only happens in the movies ;-)

Here is a close up of the device. It is a piece of plastic cut into a "Stargate" like pattern.

I almost think this isn't a hoax, but IS most likely a wheel that spins constantly based on magnetics. Problem is ... this is not reproducible in small form like they promise AND because magnetic fields are easily altered by the smallest of external forces - they could NEVER EVER get it small enough to go in a small device like a cell phone NOR able to produce enough energy for a car as they claim.

"I have to say I have never seen ANY major scientific exhibition run or controlled with an Apple computer."

Maybe that's why scientific progress is so slow. :)

The problem with Macs in science is very simple: although MANY scientists use Macs at home, the instrument makers are pretty much in bed with Bill Gates. Take HP-- a major instrument maker-- you think they are going ship their units with Macs? Nope.

Anyway, one presumes this energy thing is a hoax or a mistake, but I don't know much about it.

National Instruments has always made serial I/O cards and the MIT KIZMIT project is pretty amazing ... but you're right about most instruments they are geared towards raw data ... which is what (truthfully) Microsoft OS's are best at.

I honestly don't think it's a hoax, I do think it was overhyped and not properly presented.