The "SHUT UP" button finally makes it theaters! 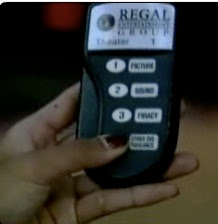 Last year I did a story called Do you love movies but hate watching them?"

Regal Cinemas honored me with a reply a few months later saying they may have a solution: "A tattle tale remote".

WCBS TV News in New York is reporting that this past Memorial Day Weekend, the system was finally put into place in a limited number of theaters. The remote allows you to alert theater management to obnoxious movie patrons, film quality issues, and suspected piracy.

All you have to do is press the appropriate button—one for picture, two for sound, three for piracy, and the last for "other disturbance"— and supposedly an usher will "respond".

Best of all, the users say they won't identify the person who pressed the alert - good because I have felt like I was going to be jumped after the movie several times after reporting annoying people.

You would think someone would have created this a long time ago. It makes me think of the power you have with cameraphones. If someone is acting out of order, just record them and publish it on the web. Busted! That's cool that they contacted you about their new remote.