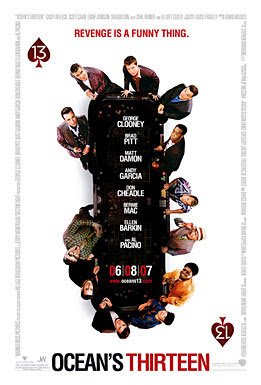 In this installment, the Ocean's Gang unites to seek out revenge when a Casino mogul reneges on a partnership with one of the crew.

I hate to keep using this cliche in this summer of trilogies, but this is the 3rd best Ocean's movie in the 3 part series thus far.

This movie chose a slightly different directoral path - by revealing the "how" of the con the entire movie. While there is a very interesting twist at the end, the action comes more from the improvisation and intelligence of the Ocean's Gang in this film.

I particularly liked the odes to Sinatra (who originally played Danny Ocean). I also enjoyed seeing Super Dave Osborne as one of the stars.

In some places the dialogue is a little too wordy and was kind of hard to follow.

You don't really have to have seen the other two for this movie to make sense, but it does help.

I would recommend it, but this one might be a "wait for it on video" release kind of recommendation.

That being said, this is the best of the summer movies that I've seen thus far. I might change my mind once I see Transformers.

Time to stop making any more of these -- just isn't working.