The visuals from both movies are stunning. All modern filmmakers credit Stanley Kubrick's 2001 as one of the foundations of their career. It's just that Kubrick chose to go a little too far with the existentialism.

All of the unique visuals from 2001 obesessive compulsively created by Kubrick fail to match a scene in 2010 for me though. One of my favorite scenes in a movie, is the awesome visual of Jupiter collapsing in the movie 2010. 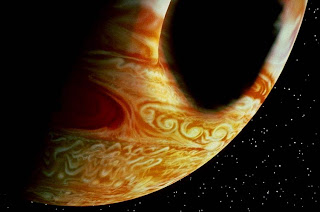 * Picture of Jupiter fading from the movie 2010

The movie is also unique in that it is the first documented collaboartion over the internet - in 1982-83 between writer Arthur C. Clarke and Hyams.

Peter Hyams, the director of 2010 has been very selective in what he directs - however, the body of his work includes some of my favorite films: Timecop (starring Jeane Claude Van Damme) and A Sound Of Thunder (starring Ben Kingsley) - both movies contain unique twists on time travel. Both were panned so bad by movie critics that it steered people away from seeing them and giving them the box office they deserved.

A third book, written by Arthur C. Clarke exists for which a 3rd movie could be made titled 2061. The Wikipedia page for 2061 indicates interest from Tom Hanks to star.

With the interest in trilogies - I really would like to see this third installment. I'm not sure if the interest is there though.

What are you smoking?

It is a film which should never be remade.

Would you try and rewrite Shakespeare? Or Mark Twain?

Just because other films are remade does not make them better. It just proves how strong and timeless the original was.

Did you see the part of the title ... OR NEED A SEQUEL?

I definitely do NOT think 2001 needs to be remade. I just think 2010 is BETTER. I would love to see the third installment to this series.

The implication is that a remake would be an option?

I really must finish 2061 one day. My reading has declined so much since the invention of the interwebnetland.
There is also a copy of 3001 The Final Odyssey sitting next to it.

This said, 2010 is a great film. Hyams made a worthy successor. 2061 has a very strange and uninteresting plot. I don't know if it should be made or not.