MacMinute not updating ... As The Apple Turns Finally Not Resolving 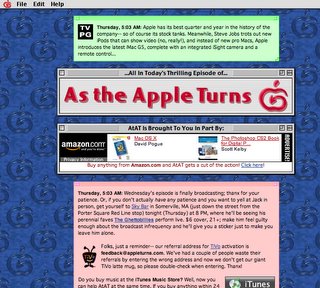 While noticing that MacMinute has not updated since June 11, 2007 (it's now the 15th) ... I thought I would type in the As The Apple Turns web address (WWW.APPLETURNS.COM) and noticed that it no longer resolves.

I still have no idea why Jack Miller, ATAT author chose to just disappear without any goodbye or reason. His absence has left a noticeable void in the humor of the Mac Community and weird vibe about his safety/health amongst the fans of his work.

I think there's a strong possibility that Jack Miller is involved with The Fake Steve Blog - and this one of the reasons no one (or not but a very priveledged few) know Fake Steve's identity.

[UPDATE] It appears as if someone read this site and put WWW.APPLETURNS.COM back up. It's getting to be a bad joke now - no updates since October 2005. Why keep it up and why pay for the domain any more?

[UPDATE] Apparently, Stan Flack (Macminute publisher) was critically injured (specifics not discussed) ... he is better now and Macminute is back to a regular update schedule.

[UPDATE] Stan Flack passed away and MacMinute is no more (but not due to the above mentioned health issue). Jack Miller has been located and just dropped all of his readers without anything further to say. Find more details by clicking the As The Apple Turns tag below.

Email ThisBlogThis!Share to TwitterShare to FacebookShare to Pinterest
: As The Apple Turns, AtAT

Funny. Would you know why osx.macnn.com takes you to appleinsider.com as of about the same time?

AppleInsider is affiliated with MacNN ... that's why!

That's still a very weird subdomain to have a redirect on. MacNN and AppleInsider are no registered by the same people either.

I have thought that as well ... but I think Macalope is Moltz from Crazy Apple Rumors. The writing styles are almost 100% the same.

From the top of the As the Apple Turns Forums page:

That's a clue, right? Albeit a sad one. But it doesn't look like abandoning AtAT was/is a deliberate choice...

The ATAT forums don't reveal much. I think Jack hit depression more than anything ... but I have a good hunch that he's involved in other places on the Mac web.

Jack Miller's Flckr account had a single picture added to it this year (First since August 1 last year):

The August pictures suggest he was in Hong Kong at least until late July last year.

This whole thing is STILL weird.

I did some digging and it appears that Jack Miller is at least paying his property taxes, so he must be alive. It's sad that he decided to just drop a large number of dedicated readers, but now the rumor of he is dead can be put to rest.