Hey, Just Because I Saw A Billboard For "Upstate Mulch" Doesn't Mean I'm A Dummy! 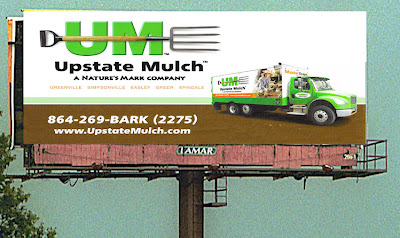 * Because of the difficulty of getting out of a car on major highway - this sign is "simulated". The picture above was taken from a brochure and added to a billboard.


I live in Greenville South Carolina. The region in which I live is called the "Upstate".

Recently, billboards have started popping up all over the area advertising for Upstate Mulch - a local gardening and landscaping chain.

I did a double take the first time I saw this sign about a month ago ... but now the billboards are everywhere - obviously they're drawing in customers. Knowing that I couldn't possibly be the only one who saw a problem with these signs that adorn major highways such as I-85 I showed the ad to all of my friends. I showed them a picture of the sign and said, "This is the new Upstate Mulch billboard ... notice anything funny about that sign?" Everyone that I showed it to, with the exception of a waiter at a local chicken wings restaurant immediately said, "Yeah it says DUMMY!"

The graphic designer for this ad should be fired, then told what he did wrong. Like I said, in my brief and informal survey, I had 5 out of 6 respondents immediately tell me what was wrong with the sign. I realize it's subtle. But the subtlety is what is most wrong with it - it ends up being almost subliminal. A billboard is meant to leave a lasting impression from a 2 second glance.

The impression I get is:

The billboard should show a pitchfork without a grip handle on the shaft; like the old style. Only a dummy at the ad agency that designed this wouldn't have seen this.

Email ThisBlogThis!Share to TwitterShare to FacebookShare to Pinterest
: advertising

The logo should have gone through a focus group.