An F with 2 lines through it is an A+

One of the first assignments I received after returning from Summer vacation to the 4th grade was to write a 500 word essay for the Amana Kitchen Of The Future Sweepstakes. The essay was open to anyone. The contest was simple; write an essay 500 words or less stating why an Amana microwave, Amana double door refridgerator with in door ice & chilled water dispenser, an Amana dishwasher, and an Amana oven with self cleaning and digital timer features would make your home a home of the future and you could win just that!

If you take a trip down memory lane ... many TV game shows and contests from the 70's and 80's featured appliances as prizes. In the early 80's, a family with a microwave was considered wealthy or fortunate.

My mother often fantasized about having a microwave and how much easier it would be to cook with one. She often clipped microwave recipes from various magazines like Southern Living - in the hopes that ONE day she would be able to use them.

I guess I was interested in this essay contest because my favorite ride at Disneyland was and still is The Carousel of Progress. The Carousel of Progress is the theme park attraction Walt Disney used to first showcase his attraction's robotic actors at Disney theme parks. The attraction features a revolving theater. The audience watches an American family as it experiences technological changes throughout the twentieth century. My family went to Florida (and The Magic Kingdom in Disney World) almost every summer when I was a child. Every time I would want to go to this attraction first! Initially, Epcot was centered around the family from The Carousel of Progress - I was disappointed when I went this past April to see that Epcot had completely abandoned the theme. 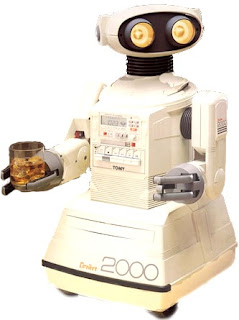 There was a dog on the kitchen floor barking at an Omnibot 2000 robot made by Tomy.

I WANTED THAT ROBOT!

Alas ... the robot WAS NOT part of the contest.

So, I came home and sat down on my bedroom floor and thought long and hard about how I could get the robot. Who cares about Amana appliances?

So I wrote the following:

My name is Rusty. That is just my nick name. I am in the 4th grade. The ONLY way my home would be the home of the future is if I had the robot pictured in your contest. My family would smile just like every one in the picture. I would smile alot! Mommy would smile if you gave her the microwave. We already have the other stuff. Thank you.

I turned "my entry" in on a Friday.

The following Monday, I received the paper back marked with:

I was heartbroken, but not defeated.

I went home, rewrote my entry onto another piece of notebook paper, placed it into an envelope, asked for a stamp, and took it to the mailbox.

I didn't show the grade to my parents.

Four weeks later ... I receive a letter from Amana.

We received your essay entry for our "Amana: Kitchen Of The Future" Sweepstakes. While your entry did not win the grand prize; a complete Amana kitchen or the first or second prizes; we have chosen to make you an "Honorable Mention" winner. We were touched by the honesty and sincerity of your short but sweet essay. Please accept our congratulations. You will be receiving your prize within 10 business days.

Five days later ... I received two large boxes. One with the Omnibot 2000 and One Amana microwave for my mother.

My dad was very curious how I had gotten these packages. I decided to come clean about getting an "F" on my paper. My dad was furious! Squinting his eyes angrily, he went to the kitchen, got a red ink pen, and drew a line down from the top of the "F" and another small line through the overhang at the top. He crossed out "Didn't follow assignment" 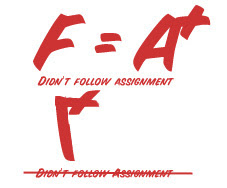 He said with a stern voice:

"Rusty - take this paper back to your teacher, tell her this is the grade you received. You won the contest. The point of the assignment was to win the contest."

After a few handshakes and introductions, my dad reiterated once again:

"Forget the content of the letter my son wrote, he won! The purpose of every contest is to win. Rusty did nothing unethical. He won, that's all there is to it. For him to get an "F" is insulting his intelligence and frankly is insulting to mine as well. I was taught that the willingness to stand up for yourself in life is the secret to acheiving success above and beyond your peers. Which of Rusty's peers won this contest? Was there any other child in the state who won anything from this contest?"

I mostly remember open mouths and blank stares at my father and I from the teacher and principal.

My dad concluded the meeting saying,

"Judy will be happy to make you both dinner in our new Amana microwave Rusty won for our family ... she's been clipping recipes for months."

I still have that robot. My mother STILL has the microwave. After 20+ years, neither work. They make great trophies though.

Email ThisBlogThis!Share to TwitterShare to FacebookShare to Pinterest
: Fix Your Thinking, Life

That was one of the best stories ever. Thank you for that.

Great story. I need your dad to help with my Cisco certification grades.

Loved the full story!! I can totally picture the scene with at the PTPA...I would love to have been a fly on the wall after that meeting!