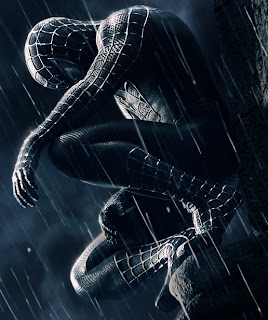 I wanted to post this update and review on Thursday night after I got back from the midnight premeire. But ... the weekend was busy with paperwork etc etc.

My best friend and I had been planning to dress up like Spiderman for a few months before the premiere and finally decided to make our own suits last month - working on them until the very last minute. 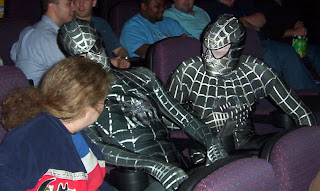 Before I go any further, I have to thank Camelot Cinemas in Greenville SC for roping off the 5 seat THX row in the center of the theater for my friends and I. We didn't want to have to wait in line for hours in Spiderman suits so I asked if the 5 seat THX row could be reserved for us. The theater owner was very kind to do that. Seeing any blockbuster in the digital THX certified theater (one of 26 in the country) is BY FAR the best way to see a movie.

Honestly, I'm not a big fan of any of the Marvel Superheroes. They always seemed to be Pepsi compared to DC's Coke. I just dressed up as something fun to do - and I really really like the look of the black suit.

I thought the character of Sandman in this film was weak and seemed rushed. The story of Sandman seemed pieced into the film just to give more whiz-bang to the special effects. I think the whole Sandman story would have fit in much better and seemed slighltly more plausible and fitting to the story had they tied the creation of Sandman into the crashing of the meteor that carried the "Venom symbiote" - even though that's not how it happened in the comics.

Sandman, Venom, and Goblin II, and in some ways Dark Spiderman as a villian just made for too many subplots. I've never understood why directors choose to saturate films with bad guys when one bad guy always proves better for chracter development - ie the first Tim Burton directed Batman.

* Me in my homemade Spiderman costume

Sam Raimi definitely came true to form with his campy side in this movie. While the dance numbers (yes ... dance numbers) were certainly funny - they seemed slightly out of place in a superhero movie and more in line with Raimi's Army Of Darkness. I enjoy campy - but I don't think it fits into good superhero films so as to make the superheroes believable. This is where the X-Men movies excel greatly.

I will most likely go see this again and wear my suit to the movie ... I have a good costume to keep in case of an emergency birthday appearance or Halloween costume contest. 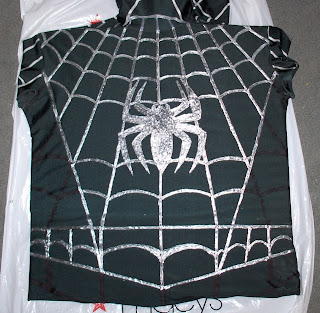 I wasn't surprised to see this break just about every movie box office record this past weekend both domestically and internationally. However, I also won't be surprised for the movie to get bad word of mouth and probably be this series' Matrix 3 - ending the franchise (at least for now and with Raimi as director).

After actually seeing the movie, I don't expect this to make as much money as either of the first two Spiderman movies. Also take into account that movie ticket prices are up dramatically since SpiderMan 2 by almost $2 per ticket nationally. Also, this film opened in 300 more theaters in the US than any other film ever released!

This was one of the most expensive (if not THE most expensive if you add in advertising) movies ever made - but within just 3 days made $357,000,000.

* Scattered throughout the offices of the The Daily Bugle were Apple HD displays and Apple keyboards.

* I had a bit of trouble looking at Kirsten Dunst during the movie after watching an episode of The Family Guy where Peter says:

... that's like making me choose between Kirsten Dunst and Sarah Jessica Parker in a Weird Face / Hot Bod Contest.

I saw the film today and I definitely enjoyed it. I'm not sure where I'd rank it in the trilogy yet, but it's still better than every other super-hero movie in modern times.

Cool Spidey costume by the way. I'm a Marvel Comics fan myself, and Spidey's my favourite so I've always wanted a decent costume. Yours is ace.