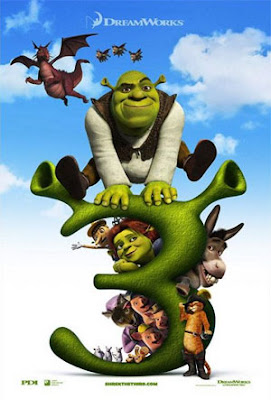 I went to see the premiere of Shrek 3 tonight.

I have never been a big fan of the Shrek films ... but certainly always thought they were entertaining and that it's an interesting concept to combine the characters from all the popular fairy tales into one plot line.

The plot to this movie was weak - the "moral to the story" was forced. (You know a forced "moral" when a character has to give a speech about what he learned.)

There wasn't enough Donkey in this film. That said ... a scene where Donkey (played by Eddie Murphy) and Pus N Boots (played by Antonio Banderas) switch bodies is probably the most memorable moment in the film.

I would say wait for Ratatouille to see in the theaters - wait for this one on video or watch Shrek I and II again - I + II = III.