Pirates Of The Caribbean III: At World's End 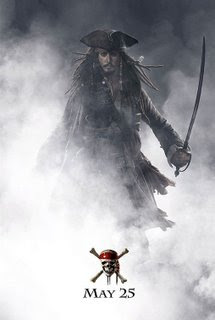 Pirates Of The Caribbean III: At World's End

I admit that the Pirates Of The Caribbean trilogy are not my favorite movies, but they have been entertaining. The last movie: Dead Man's Chest was the first movie in years that challenged the box office records set by Titanic.

It was also very interesting to see how much Disney has concentrated it's entire theme park design/merchandise sales around Pirates when I went to Disney in Florida this past April.

I have to say again, that POTC is kind of a weird series of films for me. I wouldn't put any of the 3 in my Top 100 list, and I don't own any of them on DVD, yet I would watch any of them if they were on TV or if a friend said, "Wanna come over and watch Pirates Of The Caribbean?"

As for this particular movie - there seemed like something was missing and something wasn't written quite well as it should have regarding one of the important subplots.

No movie is good to me unless it has very memorable "one liners" - and this movie had a few. My favorite:

(At a gathering of Pirates, where a bad suggestion has just been made)

The plot centers around rescuing Jack Sparrow to help fend off a vengeful Lord who wants to bring about the extinction of the Pirates. The Lord obtains the help of The Keeper Of The Evil Pirate Underworld; Davy Jones. Through a series of manipulations there is a final battle scene where all the pirates from around the globe come to make a final stand.

I was really looking forward to seeing Sao Feng (played by Chow-Yun Fat) as The Pirate from Singapore - but truthfully he wasn't utilized as much as a better script could have.

I recommend it ... if you have nothing planned for your Memorial Day Weekend ... but don't go out of your way to see it.

* Don't forget to stay for a scene after the end credits.