Movies That Need To Be Remade Or Need A Sequel: Tron

Continuing with expanded movie industry coverage here on Fix Your Thinking may I present a list of movies that I feel should be remade. I'll cover one movie at a time over the next few weeks.

Tron has a great premise with a great story and was actually cast pretty well in the early 80's (1982) - The visuals were way ahead of it's time and the game Tron (released by Bally Midway) was my favorite game as a child in the era of arcades.

I just watched this movie again a few nights ago. I had forgotten how cheesey the film actually was. The concepts were certainly different than any other movie before it, but now I see that the writing of the screenplay is where the movie really failed. With modern special effects and renewed interest in gaming - this should be a no brainer for a remake.

The movie is about a hacker named Flynn (played by Jeff Bridges) who is physically transported into a surreal world of computing and gaming by an ego maniacal server called "The Master Control Program". The movie follows Flynn's adventures in this "world" to stop the MCP and reppace him with a safety program called Tron.

The movie could be made much more plausible if Flynn were instead plugged into the Master Control Program's "world" Matrix style.

* I play a 3D Tron light cycle game on my Mac on a weekly basis: Download it here: GL Tron

* I have the movie poster from this film which I consider one of my favorites as far as artwork: 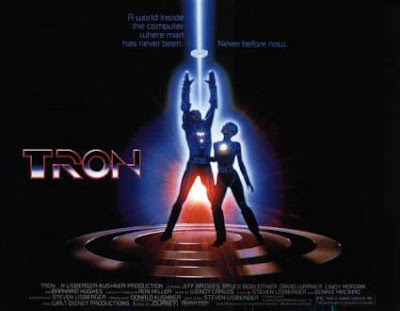 Since this movie is also a Disney property ... I see this movie making a great ride experience at Disney theme parks. Could you imagine a light cycle roller coaster?