Jerry Falwell Dead At 73: Makes Yet Another Indirect & Unintentional Contribution To Free Speech 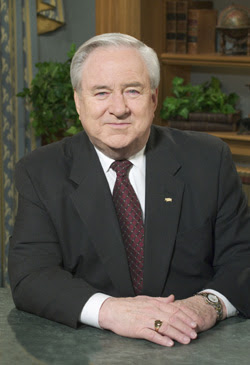 As reported by CNN:

The Rev. Jerry Falwell has died, a Liberty University executive said Tuesday. He was 73. Earlier today, Ron Godwin, the executive vice president of Falwell's Liberty University, had said Falwell was found unresponsive around 10:45 a.m. and taken to Lynchburg General Hospital. Godwin said he was not sure what caused the collapse, but said Falwell had "a history of heart challenges.

Whether or not you liked him - all (who have said so) should feel ashamed for wishing him dead.

Falwell, eventhough he was on the opposite side - brought about the most sweeping change in media in history!

He was controversial and stuck by his convictions.

I've exercised my right to block as many of the people that wished Falwell dead as I possibly could.

If you're lazy and don't care to Google for the above facts ... you can watch:

Email ThisBlogThis!Share to TwitterShare to FacebookShare to Pinterest
: digg, Life

King died late Tuesday in Santa Monica, Calif., said Steve Klein, a spokesman for the King Center. He said the family did not know the cause of death but that relatives think it might have been a heart problem.

Born in 1955 in Montgomery, Ala., King was just an infant when her home was bombed during the turbulent civil rights era.

As an actress, she appeared in numerous films and played Rosa Parks in the 1978 miniseries ''King.'' She appeared in ''Ghosts of Mississippi,'' and founded a production company called Higher Ground Productions.

She was also an author and advocate for peace and nonviolence.

Her death comes more than a year after the death of her mother, Coretta Scott King.

Yolanda King is survived by her sister, the Rev. Bernice A. King; two brothers, Martin Luther King III and Dexter Scott King; and an extended family.

Not quite sure why this (above) was submitted by an anonymous reader ... but thanks for the heads up.

Here is the FIXYOURTHINKING note about Coretta Scott King:

Falwell and King where like yin and yang. The universe keeps ballance.

A correction? I always thought he started Hustler and Bob Guccione started Penthouse.

You are correct ... I made the change. Thanks for the contribution.

You're not seeing the forest for the trees. Fallwell was one of the primary forces behind the rise of the militant, hateful religious right, the American Taliban. I'd easily trade the satire/parody ruling for Fallwell's nonexistence.

You would wish someone dead?