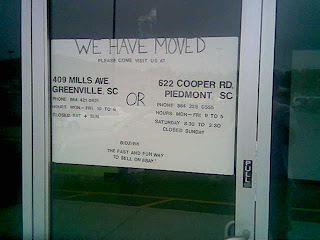 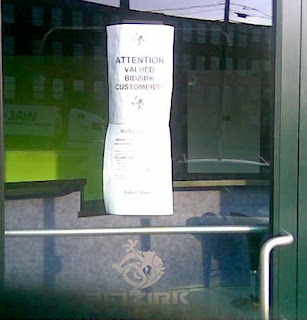 * Picture of other location "moved to"
You may have heard of pink being the new black ... but now the word "moved" is the new closed.

In January of 2006 I posted a series of articles regarding The eBay Dropoff business. In my articles I used a specific example of a local eBay dropoff I had a personal experience with.

Over the course of 2006 another eBay dropoff moved into my town and then folded within 6 months.

The business model for walk-in traffic and giving customers a 50/50 split on their items is flawed. For electronics and tools - you are most likely to get more money from a pawn shop or even a classified ad than an eBay dropoff store. For items that have fixed margins - it is next to impossible to sell your inventory through such a business.

The eBay dropoff can not maintain a sustained inventory. Therefore just as AMITHEONLYONE.ORG so often points out - these businesses are failed from the beginning unless in a high traffic / big city. Even then, repeat customers are few after they see their first check.

Bidzirk ended up suing me for my article ... the frivolous litigation is still churning through the courts as a matter of process rather than logic. The opposing attorney is well funded - mounting a counter defense - had I hired an attorney - would reach into 6 figures by now. If any of you have wondered why my posting just hasn't been the same over the last year - this is the reason.

With eBay dropoffs going out of business all over the country and large eBay dropoffs like ISOLDit stores leaving behind shells of storefronts ... these businesses can't possibly receive any favorable press or promotional consideration due to lack of faith. Thus hurting business even more.

Ken Sully, CEO of iSold It, has acknowledged publicly that there are serious flaws with the iSold It franchise concept. In an open letter published on Franchise Pick ( An Open Letter to iSold It Franchisees from CEO Ken Sully), Sully admits that 60 stores have closed and many more are struggling to survive. States Sully:

"Tragically, many individuals who believed passionately in the potential for the category have lost sizable investments, including homes and retirement savings….We personally find this unacceptable and, despite continued interest in this category, we do not feel comfortable selling any new franchises until we get the failure rate lower."

Is eBay becoming the pawn shop of the 21st Century?

I used ISOLDIT but they bought it

In reality both Greenville stores have closed and no other "stores" have opened. A warehouse exists but I'm not sure to what capacity it operates.

Again, the website of the average ebay dropoff indicates success, but the letter from the iSoldIt CEO is very telling of the current state of eBay Dropoffs.

* E-auction block also had a store locally to me and maybe survived 4 months during 2006.

The conclusion after a years trading, refining and redefining the business model is that the retail drop-off store as a stand alone concept simply does not work.

[UPDATE] Bidzirk appears to be selling inventory using the ID Bidzirk103 located in Piedmont SC. Bidzirk101 tied to Mills Mill and Bidzirk102 tied CherryDale have closed and neither ID has listed in the past 15 days as of the writing of this update.

Email ThisBlogThis!Share to TwitterShare to FacebookShare to Pinterest
: ebay, isoldit

We definetely agree that the eBay drop-off business is not for the faint-hearted, it requires large scale operations and signifcant investment in software. Read more on our thinking here: http://www.auctioning4u.co.uk/news/iSold_It_UK.

I'm publishing your comment for part it's content ... but the software IS NOT the problem. The business model is severely flawed. It can work, but only in high traffic markets with a niche focus (IE Star Wars collectibles, Tiffany Lamps, Apple Computer) The model is NOT franchiseable, accounting is only 1% of a successful business - 99% is repeat customers - of which the ebay dropoff has none (or less)