iPod Saves an iLife in iRaq 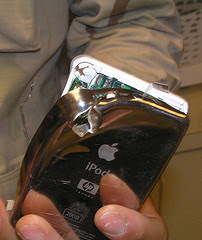 Kevin Garrad, a U.S. soldier in Iraq, was shot in the chest during a gunfight with an insurgent. The bullet hit Garrad’s fourth-generation iPod, which was in his jacket pocket, quite possibly saving his life.

The flicker photo set of the "bulleted iPod" can be found here along with this description:

My wife’s uncle works in a military hospital and told me about this. Its pretty amazing. Kevin Garrad (3rd Infantry Division) was on a street patrol in Iraq (Tikrit I believe) and as he rounded the corner of a building an armed (AK-47) insurgent came from the other side.

The two of them were within just a few feet of each other when they opened fire. The insurgent was killed and Kevin was hit in the left chest where his IPod was in his jacket pocket. It slowed the bullet down enough that it did not completely penetrate his body armor. Fortunately, Kevin suffered no wound.

I really hope that Apple sees this story floating around the Mac web and sends this soldier another iPod after tracking him down.