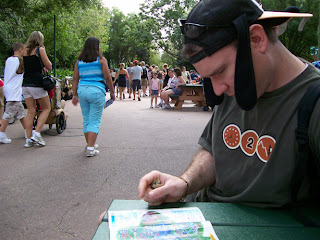 * Disney Day 1: A picture of me in my goofy hat planning our next move in the Animal Kingdom
I just got back from a week long vacation in Orlando Florida - having done all things Disney (and visited Universal Studios).

I would like to provide you with a thorough review & tip extravaganza.

First, let me start off with a guide I found on eBay regarding tickets. I didn't write this; it was written by another eBay buyer. It gives a good warning about buying Disney tickets from untrusted sources:

"Last year I purchased Walt Disney World tickets for my family on eBay. THESE WERE SOLD TO ME AS COMPLIMENTRY NO EXPIRATION 4 DAY HOPPER PASSES. I spent $795.00 for these tickets. When we arrived at the theme park and proceeded to go thru the gate we were told we needed to go to Customer Relations. There; I was asked where I purchased the tickets. I TOLD THEM EBAY. DISNEY said they go on eBay and search for these COMPLIMENTRY TICKETS because they can not be sold and are intended only for the person who received them. They took my tickets and voided them immediately. MY FAMILY AND I WERE DEVASTED AS WE STOOD THERE AND NOT PERMITTED TO GO INTO THE PARK. DISNEY would not help us and the only thing we could do was to purchase NEW tickets which cost me $900.00. THIS EXPERIENCE RUINED MY WHOLE VACATION . I hope this will help any one who thinking about purchasing DISNEY tickets on eBay PLEASE BEWARE THAT DISNEY DOES GO ON EBAY AND LOOKS FOR THESE COMPLIMENTRY TICKETS and voids them."

Before planning ANY Orlando vacation .... you should buy your tickets first. This will be your single biggest expense and will involve your most detailed planning. Hold off on buying Universal or Sea World Tickets until you arrive in Orlando. (More on that later)

Before going in early April of 2007, I looked at getting tickets through eBay. A lot of auctions looked suspicious. I bid on several that seemed legit ... but ... all auctions I bid on were cancelled soon thereafter. Know that most Disney tickets expire within 14 days of use. I find it hard to believe that those that buy the NO EXPIRATION tickets would sell them because it is a pretty big premium over normal ticket prices (about $45 per ticket).

Also know that tickets are TIED TO A FINGERPRINT on at least one day through the park - therefore voiding them for resale to anyone other than the original ticket holder. This also makes it necessary that each person have their own ticket throughout the stay. Taking a sharpie and writing the name of each person across the front of the ticket is a good idea. You can't trick the system either, hoping to resale them ... Disney gate keepers will NOT let you through without a valid fingerprint. I tried to put my knuckle through the first time and it wouldn't read.

Don't be fooled by online gimmicks offering free tickets and certainly don't think that all the billboard offers you see in Orlando for free or discounted Disney tickets are actually free - they aren't. Most if not all of these "FREE Ticket offers" involve you looking at a timeshare condominium. These "condo tours" usually take an entire day and require a MARRIED couple. If you are taking kids, it is a burden to drag them along because TRUST ME; it is a whole day. My family used to go to Disney World every year when I was a child. My dad decided to do this one year and I remember hating it. He got the FREE tickets but it was at least a 6 hour mandatory tour of the condos. And honestly, I don't feel right looking at something that I don't intend to buy and couldn't possibly afford or even be talked into buying.

Also, while in Orlando, you'll see lots of billboards for "Disney's Best Kept Secret" - these are actual Disney owned timeshares that come with free park admission - however - know that they are premium priced and still require that DAY OF LOOKING.

I found that the cheapest way to get tickets is by subscribing to the MOUSESAVERS.COM newsletter and getting a special link to an affilaite of theirs called Undercover Tourist - they will ship the tickets to you for free (via ground) - which requires a 14 day advance purchase. Or you can pick them up at a very easy to locate UPS Store on International Boulevard that is about 4.5 miles from the front gate of the Magic Kingdom and 1 mile from the gate of Universal. I got my tickets for $28 off EACH ticket at the gate price. I paid with my PayPal card to get 1.5% back which also debits my checking account where I get 1.5% back for my debits - saving me an additional $6. This is the absolute cheapest, no hassle means of getting tickets to Disney World in Florida that I found.

The "Park Hopper Ticket" option (which costs $45 extra per ticket) is VERY over-rated. Don't think that going between parks is something you ACTUALLY want to do. You can leave and come back to the same park if you like. Take the time to explore each park thoroughly. Stay for each night time show and compare. Disney's Magic Kingdom features The Electric Light Parade and a fireworks display. Epcot Features a nightly fireworks and laser show. Animal Kingdom is more clear of crowds at night ... allowing you to catch things you didn't during the day. Disney MGM has the best night time show BY FAR! It's called "Fastasmic". I suggest you get there 1 1/2 hours BEFORE THE SHOW. Some Disney staff will tell you 45 minutes, but for my experience, the theater of 12,000+ seats was completely full 45 minutes before the show. Also, don't think that the typical "front row, second row, or center center" seats are the best. Pay attention to the poorly designed outdoor theater and the poles that may block your views of the show. (More on "Fastasmic" later)

Once inside a Disney theme park, each ride has a kiosk for FastPass distribution. 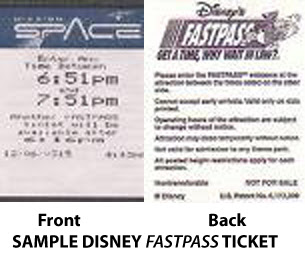 If you can, I recommend you send someone ahead of you while you wait in line for one attraction near the gates, to the attraction you most want to see or that will be the most crowded during the day. And so on throughout the day. While making sure you gage the amount of time you will be in line, send someone ahead to another attraction while you save their space in line for one attraction. A FastPass allows you to essentially walk right to the front of the line. Ticket takers and ride operators work this by taking 1 group of FastPass holders, then 1 group from "the line". The FastPass gives you a 1 hour window to return to a ride later in the day. You can only obtain a FastPass per ticket in 1 hour intervals. BUT - pay attention - if you get a FastPass at 10AM for a time between 3-4PM - note that you can obtain other FastPass tickets for rides that will ALLOW a FastPass BEFORE or AFTER the time on a currently held FastPass. It sounds confusing ... but you will understand once you get there.

Some other discounts that I found for Disney & Universal Tickets:

* If you are part of a Fortune 500 company - your Human Resources Department may have discounted tickets. Check into it and see if the Undercover Tourist Tickets (via MouseSavers newsletter) are a better deal.

* Your hotel or local restaurants in Orlando sell HEAVILY discounted Flex Tickets that allow you to go to Wet & Wild, Universal, and Sea World all for one price that is lower than ONE DAY at Universal (which is Gate priced at $79.99)

* My brother goes to Disney World every 3 to 4 years - by building up Hilton Honors points on his credit card in the interim - he essentially takes a family of four for a total cost of $600 for an ENTIRE WEEK - basically just paying for food and travel.

* Don't think that a travel agent can't get you a good deal on a hotel and Disney tickets or that there must be a markup. Most likely your travel agent can buy specials for Orlando that will be FAR FAR less than you could get with ANY discount on your own. Remember a travel agent costs you NOTHING and you don't have to accept their offer first visit ... so shop around with one or two. If in Greenville SC - I highly recommend using Stacy at Linda Long Travel just off Laurens Rd near The Great Escape and EarShot.