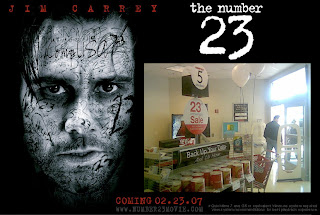 * click for larger image *
I have to be honest ... I detest CompUSA.

Only CompUSA would come up with the brilliant idea of promoting a 23rd Anniversary - when a HORROR FILM called The Number 23 was out in theaters!

Email ThisBlogThis!Share to TwitterShare to FacebookShare to Pinterest
: CompUSA, movies

Celebrating odd anniversaries/'birthdays' (like 23rd or even 3rd) is obviously not restricted to CompUSA....

...someone often featured on FYT piggybacked his 'birthday' at another event....

CompUSA seems to exist as a classic example of what NOT to do in customer service. Even the training that the associates get is mind boggling. When I was a vendor rep at CompUSA I overheard an area manager instructing the salespeople to greet customers coming by saying these exact words (and I swear I am NOT making this up): "Welcome to CompUSA! What did you want to buy today?" I'm standing there seriously waiting for Ashton Kucher to come out from behind the counter.
I had to wait in line to purchase one item behind probably four customers for at least twenty minutes. When I got up to the front of the line to make my purchase with my credit card, the cashier asked to see my ID (which was in my car) and refused to accept my credit card without it!! I can't remember when the last time was that that happened; keep in mind that it wasn't all that long ago that I was a vendor rep in that store.
It takes forever to get rebates from CompUSA and their "sales" are insulting. "Manager specials" are laughable discounts for used display merchandise.
CompUSA is on its way to being ClosedUSA if they don't make drastic changes. They are last on my list for technology shopping.