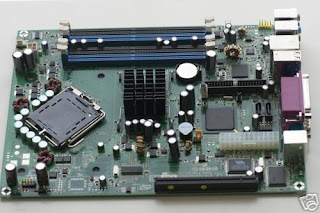 Some of the auction wording ... full auction can be seen here (unless removed by eBay):

You are bidding on an Intel Apple Development Platform motherboard. This is a software development kit used to create and run Apple Macintosh Applications for Apple's new Intel based computers. It's an ADP 2.1 board that was used to develop applications for use on all late model intel based macs (Including Mac Pro, Macbook Pro, Macbook, and Imac, Mac Mini) Its position in the firm has since been filled by a Mac Pro desktop system for further development. It has been used originally with an intel Pentium 4 CPU, and then later a dual core Pentium D CPU (the 945 'presler' model) The board is manufactured by intel and features the intel 945G chipset with an ICH7DH southbridge. It features Intel gigabit ethernet, a TPM or Trusted Platform Module, and Realtek ALC880 Intel HD audio. It uses the same GMA950 graphics as the macbook, imac and mac mini systems, but also features a PCI-Express video slot to upgrade to either an ati radeon based or Nvidia based graphics solution for development. I have personally tested this to work with an Nvidia Geforce 7300GT board by biostar, and one by PNY. The board is made in a pico BTX form factor, so be aware that you will need a BTX Apple Development Platform case or a custom case to mount this to. This board is VERY SMALL [a mere 8.5 x 10 inches], and would make a great Small Form Factor Mac. One important thing I should note about this board: THERE IS ABSOLUTELY NO ILLEGAL APPLE COPYRIGHTED SOFTWARE OR DATA INCLUDED IN THIS SALE This sale encompasses the hardware portion of this development kit only, no software whatsoever. How you use this board is at your own discretion, and providing a development install of Mac OS X is entirely up to you. The board is also fully capable of running Windows or Linux, and drivers are readily available on the intel site.

The most interesting part of the auction is that this is all very very poorly presented. What you see above is 80% of the ACTUAL text and formatting of this auction.

I sent this message to the seller - interested to see the response.

Also are you guaranteeing 100% that this is an Apple board - most Apple dev kits are marked with an Apple logo and or say "For a certain purpose ONLY- not for resale". Are you able to provide ANY documentation that this is truly an Apple board if it is not marked.

The reason I ask this is because I've seen an Apple dev unit - units like these have NOT shipped for development of 10.4.4 & higher - the unit is pictured as being able to run 10.4.8. Apple would have just sent a Mac Mini with standard Mac ports rather than PS2 and serial ports. Furthermore ... I was able to see a dev unit at MacWorld Expo 2006. They did contain P4 CPUs but the motherboards were full size motherboards and NOT pico-itx like this one appears to be.

And interestingly enough ... developing for this board would not assist in ANY WAY whatsoever with MacBook MacBook Pro or iMac development as the description implies - as the Core Duo and Core 2 Duo are completely different from the Intel P4. This board, if real, would only be able to be used for software development.

Another interesting note. As far as I know ... the iMac, MacMini, MacBook, and MacBook Pro all have (2) RAM slots not (4) like this picture illustrates. Again, without firewire and the proper RAM addressing - no hardware development could be done on this unit (although I may be wrong).

But if you read the article it says that 10.4.8 runs WITHOUT a user interface. It runs the Mac OS in a command line format called Single User Mode. (No Desktop. No Finder.)

I do know that the full Mac OS can hacked to run on a generic PC that contains the right parts, but this auction is essentially promising a "ready to go" generic board. Apple has recalled ALL dev kits so that they would not be distributed like this. It wouldn't be possible for anyone to have this item for sale.

[UPDATE] I received this response from DanielK (the seller):

I offer no returns of any kind. i can run mac os x on it. i have a dev disk. if you were to have the same disk or a copy you could too. i offer no documentation because i wish to avoid all liability. all serial numbers have been removed.

Email ThisBlogThis!Share to TwitterShare to FacebookShare to Pinterest
: Apple, ebay