What If The Big Four Music Companies Tried "A Day Without DRM"? 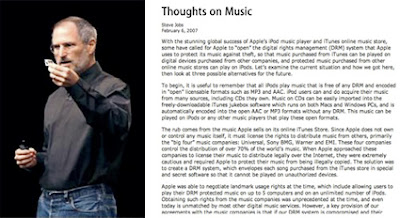 Thomas Hawk clarifies that Steve Jobs "Thoughts On Music" essay was bait that consumers (and Jobs) were feeding to the RIAA sharks.

It's a great read.

What I would like to know is why doesn't the music industry allow us to put our money where our mouths are? Why won't ONE of the big four music companies (Sony BMG, EMI, Universal, or Warner) try no DRM ... 3 months ... 1 quarter is all we ask. Open up the entire catalog on all legal download stores ... make [us] the consumer put our money down and PROVE that we would support a system of open DRM. Also make Apple (and Steve Jobs) prove the sincerity of this statement:

"... abolish DRMs entirely. Imagine a world where every online store sells DRM-free music encoded in open licensable formats. In such a world, any player can play music purchased from any store, and any store can sell music which is playable on all players. This is clearly the best alternative for consumers, and Apple would embrace it in a heartbeat. If the big four music companies would license Apple their music without the requirement that it be protected with a DRM, we would switch to selling only DRM-free music on our iTunes store. Every iPod ever made will play this DRM-free music."

Make Jobs write another essay about the full disclosure of the trial deal of 90 Days Without DRM.

Another way the music industry could "see if DRM inhibits sales" is to have random days each quarter where there is no DRM on the various music stores. Different stores would be given different days at random with only a 72 hour (at best) notification to potential consumers. Word would travel around the blogosphere and the internet very quickly and possibly even the national news. The first couple of times there were "Days Without DRM" - the news would most likely get international attention. Heck ... why couldn't NBC (which is owned by Universal) advertise it?

The randomness would not inhibit current sales at any store - if you happened to download on a day that has no DRM - it's like a present ... if not and you were going to download your song from a particular Music store anyway then ... well ... you got your song and you are still happy.

I could say with 100% certainty that the Days Without DRM would be huge ...but more importantly it would make all of us ... the consumer, Steve Jobs, the RIAA all put up or shut about this issue.

I can say with all certainty that I would download at least $10 worth. I have only purchased 17 songs total for my own listening pleasure from iTunes. Each song I have burned to CD and ripped back to iTunes DRM-free.