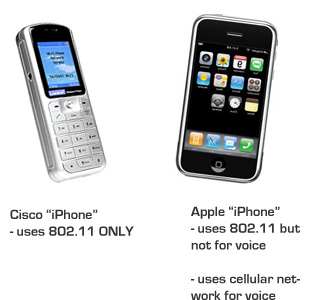 Cisco today saiid it has filed a lawsuit against Apple seeking to prevent the company from using the iPhone trademark, reports MarketWatch. "Cisco said it obtained the iPhone trademark in 2000 after acquiring Infogear. Cisco said Infogear's original filing for the trademark was on March 20, 1996. 'There is no doubt that Apple's new phone is very exciting, but they should not be using our trademark without our permission,' said Mark Chandler, Cisco's senior vice president and general counsel, in a statement."

I imagine this statement ...

"Given Apple's numerous requests for permission to use Cisco's iPhone trademark over the past several years and our extensive discussions with them recently, it is our belief that with their announcement today Apple intends to agree to the final documents and public statement that were distributed to them last night and addressed a few remaining items," Cisco said in a statement obtained by CNN. "We expect to receive a signed agreement today."

... meant Cisco was asking for an outrageous amount. I also believe Cisco just PURPOSELY released their VOIP phone (and called it "iPhone") because they knew (as I did) that Apple was releasing a phone and were going to call it the "iPhone". I completely understand Cisco's position, but I think they are trying to take advantage of Apple in this particular instance.

I hope it comes out soon how much Cisco wanted for the "iPhone" name. I believe Apple will try to make the case that Cisco couldn't possibly profit more than the amount they asked for in all totality of the sales for their device.

Here is a funny, but detailed and accurate comparison view of the two "iPhones":

I think Apple should enlist the assistance of it's design partners (such as Sony) and sue Cisco over this design: 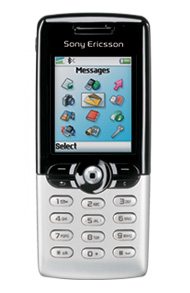 From The Wall Street Journal Blog:


Apple spokesman Steve Dowling called the Cisco lawsuit “silly,” adding there are several companies using the term iPhone for VOIP products, and Cisco’s trademark is “tenuous at best.” “We’re the first company to ever use the iPhone name for a cellphone,” he said. “If Cisco wants to challenge us on it, we’re very confident we’ll prevail.”

It's interesting that Cisco has not chosen to go after these VOIP phones named the "iPhone":

Not going after Teledex for these phones which have been out for some time and actually use the same type of technology as Cisco's phones is very telling of Cisco's intentions.

Here's another VOIP phone called "iPhone" (read the screen on the handset): 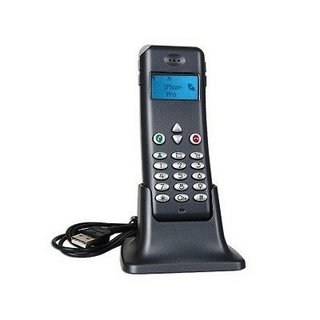 If Apple had come out with this prototype that I ACTUALLY SAW, Cisco might have a small case that Apple's phone is a communicating device that looks similar:

So, I was surprised and disappointed when Apple decided to go ahead and announce their new product with our trademarked name without reaching an agreement. It was essentially the equivalent of “we’re too busy.” Despite being very close to an agreement, we had no substantive communication from Apple after 8pm Monday, including after their launch, when we made clear we expected closure. What were the issues at the table that kept us from an agreement? Was it money? No. Was it a royalty on every Apple phone? No. Was it an exchange for Cisco products or services? No.

But then the blog entry goes right into the next paragraph and contradicts this statement:

Fundamentally we wanted an open approach. We hoped our products could interoperate in the future. In our view, the network provides the basis to make this happen—it provides the foundation of innovation that allows converged devices to deliver the services that consumers want. Our goal was to take that to the next level by facilitating collaboration with Apple.

Cisco is in a tight spot on this issue and i think while they will be able to defend it well, Apple will prevail because of the simple fact they did not register iPhone.com (which the Internet Telephone Company owns), iPhone.org (which Apple owns) ... nor does Cisco own ALL international copyrights and trademarks to the name. (Apple owns 12 other trademarks for iPhone in OTHER countries)