Is eBay Becoming The Pawn Shop Of The 21st Century? 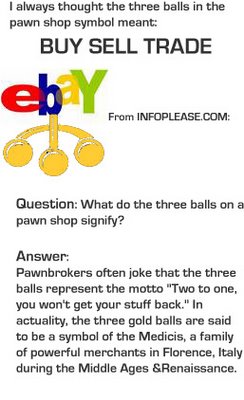 As reported on Slashdot:

"A man from Great Neck, Long Island has been arrested on charges of stealing electronic equipment and selling it on Ebay. The police were tipped off when one of his alleged victims was searching for a replacement GPS device and found a perfect match on eBay — almost too perfect. A quick check of the serial number (note to cyber-criminals: don't post those) showed that it was the exact device that had been stolen." From the article: "Police and prosecutors were hesitant to provide details of how they determined all the devices had been stolen, but at least two of the laptops were stamped 'Property of St. John's University.' Detective Ray Cote noted that the GPS devices specifically had the addresses of the legitimate owners programmed in and police were now contacting those victims to eventually return the items."

What kind of position does this put eBay dropoffs in? Shouldn't they be regulated just like Pawn Shops and required to write down serial numbers and be checked regularly by police as well? Pawn Shop owners/operators should be enraged by the rise in competition from the likes of iSoldIt stores.