Is Cisco About To Get Fined Over The Name iPhone?

This blog at ZDNET would indicate so.

It appears that by the claim Cisco made (which was late in it's submission and only missed a 6 month grace period of complete loss of registration by 12 days) they also FICTIONALIZED the usage of the mark to the USPTO.

The Cisco iPhone trademark was registered 11/16/1999 (Reg. No. 2293011). In order to keep a trademark registration active, you have to file a Declaration of Use on or before the sixth anniversary of the registration date, in which you state, under penalty of perjury, that you have been using the trademark continuously during that period. The sixth anniversary would have been 11/16/2005.

Cisco did not file the Declaration of Use by 11/16/2005, which if they had been using the trademark would seemingly have been easy to do. However, the USPTO gives you an extra six months grace period, if you pay an extra fee. This grace period would have expired 5/16/2006. Cisco filed a Declaration of Use on 5/4/2006 which kept their registration active. Had they not filed, their registration would have been canceled.

With the Declaration, you are required to file a copy of a label or other packaging showing the trademark in use. Cisco filed a picture of the box for the Linksys iPhone. 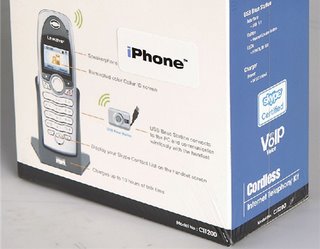 (Notice the word "iPhone" is NOT actually on a shipping product, it was instead a label affixed to the OUTSIDE of a box) It's also worthy to note that Cisco did not own Linksys at the time of the submission or at any point during 90% of it's useable lifespan) Linksys was purchased by Cisco in 2003. (Correction to the ZDNET article above) The registration was actually made by another company that Linksys acquired in 1997 (Infogear) and was renewed again in 1999 by Linksys)

Cisco revealed it’s been holding onto the registered name of “iPhone” since it took over Linksys (which had acquired a company called Infogear in 2000). Infogear had registered "iPhone" in 1997 a few months BEFORE the "iMac" was first publicly released by Jobs.

SO I SUBMIT: Linksys didn't even use the trademark within the 6 year timeframe before Linksys was acquired by Cisco.