How to get out of a cell phone contract so you can get an iPhone! 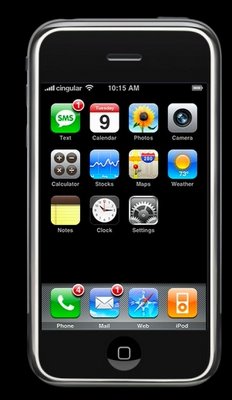 Here's the information in case you need to switch to Cingular... you have until June 2007.

Here's a few tips for getting out of a cell phone contract just in case the time comes soon that you have to switch:

Complain due to lack of satisfaction. Say you want out because the service isn't up to par. (And really, is it?) Then back that up by filing official complaints online with the Federal Trade Commission and the Better Business Bureau.

Try a market-based fix. Some companies such as Celltradeusa.com match unhappy mobile customers with people who'd like to sign up - at a discount, of course. You'll pay a $20 fee to sell your contract on the block.

Hidden charges. Look for your provider to bury changes to the Terms of Service within your bill. Quite often providers modify their service plans, much of the time the modification is a benefit. It doesn't matter, this voids the previous contract. Read the small print on those inserts included with your bill, it will spell out that you have 30 days (may vary on where you live) to cancel your contract with no charge simply because they changed the contract.

Move or get a virtual address. Study your provider's coverage map and find a town (maybe in Alaska?) with absolutely no service. Then tell the company you're moving there. They're not legally required to cut you loose, but frustrated consumers have reported success.

The known bad. Get a known problematic phone, complain 3 times, be let out of a contract due to your local lemon law.

Join the Army. Some people have finagled their way out of a contract when they just got orders to ship off to Iraq.

Force them to produce the signed contract. Tell them you didn't get a copy of the contract (which actually is pretty likely) and ask them to produce a copy and mail it to you. In many cases, copies haven't been scanned into the database, especially with recent mergers, and if they can't produce a copy, the most they can legally hold you to is a year.

Contact the FCC. If you have a valid complaint(s), contact the Federal Communications Commission (FCC, USA only). Typically, your case will be reviewed and the FCC will contact the phone company. In most cases, the phone company will avoid any confrontations with this government body, and will choose to be agreeable and expedite the necessary steps to resolve the complaint. List your opinion for the only valid resolution to be that of contract cancellation without applying fees.

Shrink your plan. As a last resort, cut back to the bare minimum the provider allows and drop any frills, like picture-messaging. Depending on the number of months you have left, this could be cheaper than paying the typically prorated termination fee, which can often run up to $200.
Make them pay.. Many people have reported success by making the cellphone company pay money each month instead of making it.

Free Roaming. Most phones come with free roaming now. But it's not actually free. The company pays it for you. So all you do is go to an area that roaming(and when you have free nights or weekends) and place a long (5 hours?) phone call to "Moviefone" or something along those lines. This will start adding up for them in the fees they have to pay to the service provider in that area and they will kick you out of the contract. Too bad.

Notes: No contract is enforceable on a minor. Be honest. Use only the tips that apply to you. Those in Europe, for the most part don't have this problem because they are not required to have a contract.

* Thanks to this WikiHow article for the majority of the wording for this reference, which I contributed to and helped revise significantly.