A CopyCat Suing Apple For Being The Best? 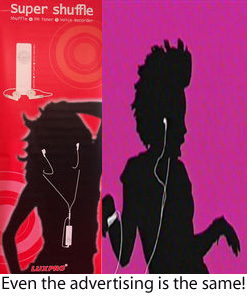 'Luxpro to countersue Apple for $100m'

A story on the Financial Times Web site reports that Taiwanese electronics firm Luxpro, which won a lawsuit filed against it by Apple over an iPod shuffle "imitation," has now countersued the company. "We plan to sue Apple in a Taiwanese court before the end of the month and demand $100m in compensation for the revenues we have lost due to their abuse of their global power," Wu Fu-chin, Luxpro chairman, told the Financial Times. Apple could not be reached for comment.

This is nothing short of absurd.

If you remember, LuxPro is the company who came out with a widely discussed iPod Shuffle (1st gen) imitation initially called The Super Shuffle (later changed names to Super Tangent). I wasn't aware that Apple had lost any litigation regarding this "design/trade dress" lawsuit. The Financial Times fails to link to any website or court decision regarding this issue.

They shoulda just called it The iRuffle

[UPDATE]: iLounge has this information:

In August 2005, Apple sought and received an injunction to stop sales of the Luxpro player from the Shihlin District Court in Taipei. Luxpro appealed and won subsequent lawsuits in the Taiwan High Court and the Taiwan Supreme Court. Last month, the Shihlin District Court lifted the original injunction, stating that “the appearances of the two products are significantly dissimilar.” 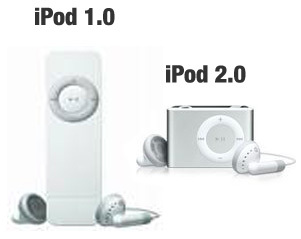 Could LuxPro have possibly tricked the court by presenting the latest Shuffle (2.0) design as evidence of "not copying"? It just seems weird that a judge couldn't see this was a blatant copy of an existing product meant solely to capitalize on the sales and advertising of another company.