Here is a very detailed blog post with a timeline for all things "iPhone":

Use it combat any naysayers or anti-Apple posts.

While on the topic of the iPhone, as I was perusing the various Apple related threads at SlashDot ... which most seem to be talking about the "iPhone". Apple haters (read as trolls) are constantly using the recent news that Cisco released a VOIP phone called the iPhone and owns the trademark in the US.

Here is one of my replies to the subject:

Any negotiations over the "iPhone" name with such a large company (like Cisco) that Apple couldn't control all the loose lips would have certainly given away that Apple is indeed producing a cellphone ... therefore ... no negotiations. Has anyone ever considered A) It's only called the "iPhone" as a codename, or B) Cisco/Linksys released an "iPhone" to make the name a lot more valuable. That's what I would've done! Then sell the name for twice as much and divide the extra cash amongst my immediate staff.

Here is a recently released patent from the USPTO: 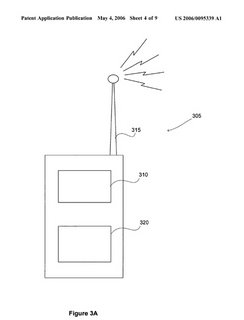 More on this connection can be found here where a blog commenter also makes a up cool name ... TeliPod

I would think that if Apple were to release a phone that they would not use the name iPhone. The brand value is around iPod. I would think the name would probably included iPod as that would carry the most weight with customers. iPod Phone, or iPod Mobile would make more sense than iPhone.

Hey, I was the anonymous poster that posted the first comment on your original article last week. I am not an Apple hater. I had read an article on the Cisco iPhone prior to reading yours that day. I pointed out something that I thought you had not. In looking back at the original article I see a disclaimer at the bottom that reads:

If it was there at the time I read the article the first time, then I apologize.

I own various Apple hardware and am patiently waiting for the opportunity to own an Apple phone (my contract w/ Cingular, formerly ATTWS, ran out two years ago and I've been holding on to an old SE T637) and/or PDA (as I have been since I sold my old Newton MessagePad 130 a few years ago).