Walmart not at all part of WalmartWatch.com's agenda? 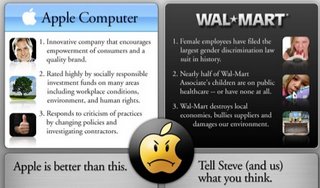 As reported by The Unofficial Apple Weblog:

Wal-Mart Watch, an independent organization that keeps tabs on what Wal-Mart is up to, isn't happy that Apple is considering a partnership with the big W.

Recall, if you will, that Wal-Mart wasn't so happy about the iTunes Store potentially biting into their share of the movie business. The solution? Buy a coupon for that download at Wal-Mart and everyone wins (at least according to the possible partnership).

Wal-Mart Watch wants you to tell Steve not to enter into a deal with Wal-Mart. They have created a page contrasting the two company's, and Wal-Mart doesn't do so well.

I, personally, refuse to shop at Wal-Mart but I know I'm in the minority there. Let your voice be heard!

I personally love to shop at Walmart - low prices, clean stores, everything I want with the exception of ... not enough Apple Computers ... make that ... no Apple Computers. They do carry Apple Front Row Remotes though!

I hope you treat the staff at Wal-Mart better than this dickhead treats this particular "convenience store" employee.

I don't know what is sadder - him finding the situation funny or thinking it worthy of inclusion on his "blog".....

lol ... it also has so many grammatical errors it's hard to read. I stopped reading his blog after he called me a lunatic. I think you're the only one that reads it.

I'm actually understanding of the retail experience, the only thing I get upset about is when there's the "I hate this job, here take this stuff" attitude.

Phillip, is it okay slam Wal-Mart in this post and not have it removed? Did you look into any of the items I sent you about how Wal-Mart is destroying the US?

My experience is that every Target store has always been brighter and cleaner on average than any Wal-Mart store. If you shop sales their prices are very comparable.

One of the items on my list of the problems with Wal-Mart is their "Opening Pricepoint" policy. They put loss leader prices in their ads but they have higher prices on the items that people are more likely to buy.

There are a lot of clueless liberals who go along with it because they like bleeding hearts for "the poor" employees of walmart--- but when you point out to them that walmart makes the poorest in societies dollars go further, their eyes just glaze over.

The real reason clueless liberals hate walmart is because the poor do shop there and are able to buy things ofr less money, nad the liberals hate to mix with the "riff raff" that shop at walmart.

Walmart is a great american company and has almost single handedly kept us out of another great depression (by ameliorating the effects of rampant liberal spending driven, of course, inflation.)

Anyone who hates walmart is an idiot.

nyone who hates walmart is an idiot.

I understand those that don't shop there for personal reasons - ie I don't shop at Kmart because I can't stand the dirtiness and layout ... and I never liked Sears for the same reason.