A little navigation assistance through the recent iPhone information 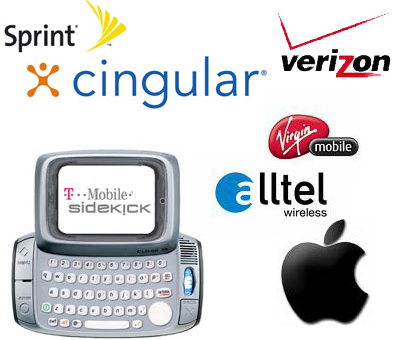 Latest On Apple's Phone: Cingular Out, MVNO In?

Many have seen this event as an essential death-sentence to the rumor that Apple would be launching the 'iPhone' as Cingular-only initially. However, the possibility still exists that Apple could operate as a "mobile virtual network operator" (MVNO) on Cingular's network.

Early this year it was discovered that Apple was seeking RF engineers with EDGE experience (EDGE is a relatively high-bandwidth mobile network for GSM carriers such as Cingular). Around the same time, Apple acquired a large datacenter in California that was originally designed for MCI WorldCom.

A release date concerning Apple's phone has notoriously been a moving target for rumor sites to pin down. The latest consensus has appeared to pin down early 2007 with an introduction perhaps at MacWorld San Francisco, however some unconfirmed rumblings from MacRumors sources have been indicating that a spring release may also be in the cards.

I made a comment in the forums associated with this topic:

TCMCAM said: "Cingular is not the only GSM carrier in the USA.

T-Mobile is pretty big too. They have just purchased a ton of bandwidth for new high-speed services.

Remember the T-Mobile CEO saying "we have a similar vision as Apple" ?

That's why Cingular went with Microsoft, they know they didn't win over Apple. So, this is most likely going to be a T-Mobile partnership (whose corporate parent has a HUGE presence in Europe)."

T-Mobile is actually pretty small when compared with the top 3:

The top 3 comprise 78% of cell phones in the country.

I doubt the comments from the T-Mobile CEO had much to do with the decision.

Cingular is currently is the only major carrier that does not have an MVNO based on it's lines. (As far as I know)

Sprint has some Virgin Mobile, some TraCphone, & other prepaid offerings

AT&T wireless used to have SunCom as an MVNO, but when they merged with Cingular they went independent - putting up their own towers and leasing some towers from Cingular.

It's my opinion that Apple will be a Cingular based MVNO and that the phone will work on TMobile and SunCom - but just won't be supported - just like Cingular phones are now. IE - I can buy a TMobile Sidekick on eBay and use it on Cingular, I just don't have the same plan or all features available to me.

The only alliance that I see Apple may have with T-Mobile is that Danger - which makes the semi-exclusive T-Mobile SideKick has Steve Wozniak as an investor.

Now, you can look at that coincidence from two angles:

1) It's just something Woz saw promise in
2) He's been there (at Danger) as a technology partner/development partner for Danger all along to be able to assist Apple first hand with their own Phone efforts. A plant, if you will.

Personally, I see the iPhone as being something very very similar to a Sidekick ... but better.