To Serve Man: It's A Cook Book! 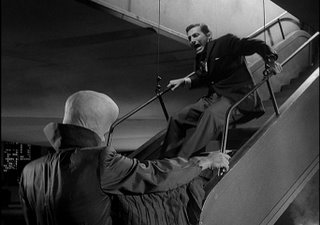 One of my favorite Twilight Zone episodes involves an alien race coming to earth, benevolently providing us with a cure for cancer and solving world hunger. They offer to take "visitors" back to their home planet to help repopulate their own planet. The aliens carry a "sacred" book called (by translation) "To Serve Man" - a few select translators eventually discover that "To Serve Man" is actually a cookbook.

Just as you see in the screenshot above, I am very disatisfied with the MyDreamApp competition so far.

The second round of voting ended on Friday. The front runner is now a Cookbook app called very "un"creatively Cookbook.

Another of my favorites was eliminated; iStyleIt. To me, this type of app has never existed on the Mac before (in any form). I think it would have been an interesting app - intriguing enough to "download for curiosity sake". It also followed the "initial guidelines" for app ideas by potentially being a great app to use Leopard's Core Animation functionality.

In the forums at MyDreamApp:

I guess Omni making OmniFocus sort of kills iGTD before it even has lifted off the ground. Add Inbox from Midnight Beep and you have two awesome competitiors. Even if it's a great idea, I'm afraid it never will be able to compete with these.

Too bad iStyleIt dropped out this round. Not because I'm sure I would use it myself, but because it was somethin entirely different, and something that I think that the Mac would have handled in a very cool way with Core Animation etc.

This is depressing ... the most uninventive and already done by Williams Sonoma and Bloom grocery stores concept has reached number 1? This is an obvious great choice from a programming angle ... it'll be a cinch to code!

I sure hope one of the guest judges like Gruber brings some sense back to this! I want to hear a reasonable analysis and explanation of the results thus far.

I'm losing interest in this competition each day. It seems to be yet another "Overhyped" idea that had great potential that has been ruined by lack of moderation and sensible judging.