I'm offended by the stupidity ... 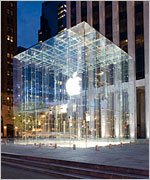 From The Unofficial Apple Weblog:

The Middle East Media Research Institute (MEMRI) reports that the glass Cube Apple erected earlier this year on New York's tony Fifth Ave, dubbed Apple Mecca by many of the Mac faithful, is offensive to Muslims due to the Cube's resemblance to the Ka'bah (aka The House of Abraham). The report goes on to say that there's a genuine belief that the design of the store was specifically meant to provoke Muslims and cites other contributing insults such Apple housing "bars" that sell alcoholic beverages within the Cube structure and it being open 24/7

This is nothing short of stupidity ... and how do you like that last comment about Apple having bars that sell alchoholic beverages?

Not only does Apple not sell alchohol at ANY Apple Store but they stopped giving away free water a few years back!

Here is a link to the report that was just published but written in advance of the store's opeining:

* Although many definitions and descriptions in Wikipedia are bias and left leaning, the best history seems to be compiled in the Wikipedia description of MEMRI... so you decide.

* Memri.org has a very high page view ... around 80,000 per day. They also have a very far reach. Go to ALEXA.COM and type in "MEMRI.ORG" If the premise is that this website is purposely reporting false news reports and isn't claiming to be satire, then why don't we as Mac Users put an end to it?

Sorry for posting, on account of being a troll and all, but at first glance at your site i saw not contact info. So, i figured I would post this here.

Hi, I actually read something about that and MEMRI when I looked up information about the website.

I don't think the Gaurdian's information was backed up by any concrete evidence that it was run by "Israelis" to undermine Islam.

The contention of the article (and the one you linked to) is that MEMRI is another Landover Baptist?

The Gaurdian's article talks about how the cofounder/president of MEMRI is a former Israeli military officer and that three staff members are also Israelis. So, I think to say that there is concrete evidence that Israelis are involved in the site. I am not willing to make the jump to the conclusion that is a vast Israeli plot to overthrough Islam though. I don't think the Guardian meant to state that as well. I think they were just talking about some red flags that were sent up when looking into the group.


I am not sure that the contention is that they are like Landover Baptist. Landover Baptist is far more obviously humor than this site is (or MEMRI just could be bad at it).

I think there are certainly some suspect things about the article on on MEMRI. First off they reference a post on a "Islamic website" but never actually link to the post nor give the full quote.

The date thing is odd to me as well. TUAW says that it the article was clearly written before, but that article never states that. In fact is says "On October 10, 2006, an Islamic website posted...." I could see the mix up if this was the same day that MEMRI posted the article but MEMRI posted on the 11th. Obviously for this to make any sense it would have to been written before the 10th, but it is a bit generous to decide that is the case.

Anyway I wrote to MEMRI and asked for the link to the original posting. I will let you know if I hear anything back.

There are some explanations as I don't see the site as a parody just because of the origin of the authors. I also just don't trust/respect the reporting on The Gaurdian very much.

Here are some plausible explanations ...

The islamic website may not want to be linked or can be linked due to translation, association with terror, or just desire to be unassociated ... just as I don't try to link to any iProng stuff here on this site even if I mention Bill Palmer in a post.

Now, I'm not taking up for the site, because I have to admit that I was duped.

It would seem though that there would be an outcry or more information available questioning the credibility of the site though.

As the owner of the website/blog mentioned in this article, please don't get the mistaken impression that I'm dismissing MEMRI as a parody like Landover Baptist. Landover Baptist is obviously satire, whereas MEMRI is merely out to spread misinformation -- comparing MEMRI to other propaganda peddlers like Fox News or Little Green Footballs would be much more appropriate, IMO.

Apple Gazette here. We did some field research and found out that Muslims actually love the Apple Cube!

"Apple Gazette here. We did some field research and found out that Muslims actually love the Apple Cube!"

And just as I said above and sort of hypocritically you cited no other sources ... you just regurgitated the electric escape article. The ONLY source that says "MEMRI" is known for questionable articles is The Gaurdian.

Where are the "other sources" that aren't quoting The Gaurdian questioning MEMRI.

Again, I'm not taking up for them, but it seems those that are challenging the information aren't checking multiple sources either.

A site that doesn't have a parody notice is and could be in big trouble!

Like Fox News? You lost a lot of credibility there. Saying such is just as much liberal propoganda.

And for your information, Landover Baptist is funded by several Atheist organizations ... therefore, meant to undermine Christianity.

If your (and The Gaurdian's) opinion is true then the site is technically breaking the law by not having somewhere (as Landover Baptist does) that the site is satire.

Juan Cole, a professor at the University of Michigan has also been critical of MEMRI. To the point that the threatened to sue him. You can read about the threat here.

Sourcewatch also cast doubt on the nature of MEMRI. You can read that here.

The issues raised by critics from the Guardian to Jaun Cole is not that this site is a parody or making up blatant lies, but rather they go looking for the worst things said, translate them and publish them as the views of the Arab world. The Guardian did point out an instance where they actually MEMRI claimed a paper was state run when it was private, but I think that can be an honest mistake, and not a malicious lie.

I even except that someone somewhere actually said what they reposted, but without a link, full quote or context it is questionable at best. Was the original post a joke? The ramblings of an insane person? Just posted in a forum somewhere? To me the intent was to paint muslims with a broad brush by distributing the actual quote, and it worked. Just look at the headlines:

What community? MEMRI never says a community or group endorsed the opinion just that it was posted on a website.

Muslims in general? And we know more than one is offended?

Even your original post has something about "religious groups" in, but that seems to have been edited out. Though you clearly note in the comments that you feel at least somewhat duped by the site.

Techweb probably has done the best job with this as they did something that actually resembles journalism. You can read the article here

Interesting that MEMRI would not respond to questions about the source. The article also has someone other than The Guardian that is critical of MEMRI.

And just as I said above and sort of hypocritically you cited no other sources
And to be fair, MEMRI cites no source either.

If your (and The Guardian's) opinion is true then the site is technically breaking the law by not having somewhere (as Landover Baptist does) that the site is satire.

The site clearly not satire. It is non profit organization. The Guardian also never claimed it was satire, and in fact I can't find anyone who has mentioned the possibility other than you.

The Guardian also never claimed it was satire, and in fact I can't find anyone who has mentioned the possibility other than you.

The reason I mention that is because you can't do what they do - "cherry pick" stories that aren't verified.

You must state a goal, intention, or caveat emptor if you report like that.

While not mandatory, the SPJ code of Ethics for journalists says:


Members of the Society of Professional Journalists believe that public enlightenment is the forerunner of justice and the foundation of democracy. The duty of the journalist is to further those ends by seeking truth and providing a fair and comprehensive account of events and issues. Conscientious journalists from all media and specialties strive to serve the public with thoroughness and honesty. Professional integrity is the cornerstone of a journalist's credibility. Members of the Society share a dedication to ethical behavior and adopt this code to declare the Society's principles and standards of practice.

Being a funded organization, I take it that they present to "investors" [funding sources] that they are a news organization. Again, if you claim you are a professional journalism source, you have to wear the toga AND follow the law of Ceasar [Law Of Ceasar in this case=SPJ Ethics code]

You can't masquerdae that you are reporting the truth by translating or biasly picking stories that no one else is reporting.

The only ethical, non libelous way of reporting is through self experience, filming, tape recording, or "ganging" (ganging = If CNN reports it, NBC, CBS, ABC, FOX report it) - ONLY after one of these criteria are met can one add opinion, editorial, or postulation without being slanderous, libelous and accountable for damages!

Therefore, that's why I make reference to a satire site ... are they just not referencing their true intentions as Landover does?