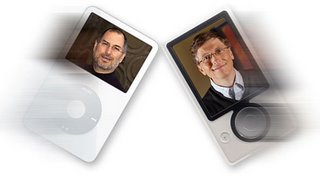 Comments on the focus group findings:

A Microsoft spokeswoman in Montreal told CanWest News Service that `it was pointed out to us'' during focus groups in the province that the proposed brand name sounded much like a French-Canadian term used as a euphemism for penis or vagina.

The French word `zoune'' and the variant `bizoune'' typically serve as a less jolting way of referring to male or female genitalia when addressing children.

`It's very much slang,'' said Nathalie Bergeron, noting that the words are not common parts of French-Canadian vocabulary.

`Microsoft did do extensive customer research in Quebec,'' Bergeron added, and concluded that the name Zune was `very effective'' and posed no risk of becoming known as an embarrassing double entendre.

Since we're being picky about names and their implications to bathroom humor or genitalia: iPod does start " I - P".

I need to go to the bathroom ... more later.

I need to go to the bathroom ... more later.